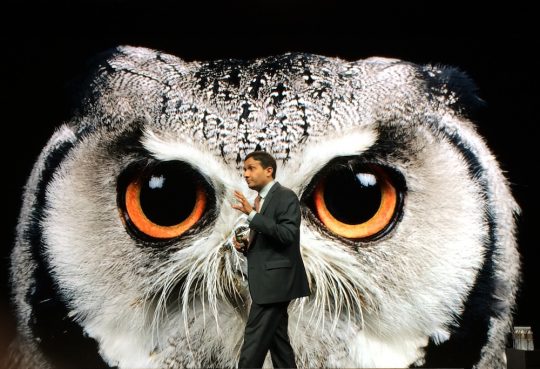 There were two oxen, the smaller of which demonstrated the ability to pull one thousand pounds, and the larger 6,000. “They yoked them together to see what they could do—and like at any festival there was lots of betting going on,” Parthasarathi said. “They ended up pulling over 10,000 pounds, much more than anybody ever imagined.”

Parthasarathi is Cyence’s founder and was CEO until Guidewire’s acquisition of the data science company earlier this fall. “We hope to allow Guidewire to pull far more weight than anybody ever imagined,” he quipped.

Parthasarathi describes Cyence’s offering as a “data listening engine” that can derive meaningful insights from vast amounts of disparate data. “We chose the term ‘listening’ because ‘hearing’ is about the obvious,” he said. Gesturing to an image of amassed San Francisco Giants fans he said, “You can put a lot of analytics on top of the obvious, for example, how many people in the crowd, how many are standing or sitting.”

Finding the Non-Obvious in a Data Set

Listening is about finding the non-obvious in a data set, Parthasarathi continued. “It’s finding that facet, that one key insight—that one dodger fan amongst a sea of Giats fans. It’s asking the right question: ‘Who are they playing?’ ‘What just happened?,’ or ‘Why is this guy so sad!’”

Parthasarathi distilled Cyence’s role as providing the insurance industry with an engine to crunch massive amounts of data to solve non-obvious problems. “The greatest thing about the 21st century is that now there’s so much insurance-relevant data out there, such as social media, Internet activity, insured created content, and public records,” he observed.

Cyence’s “data listening engine” works through three discrete processes, according to Parthasarathi: data collection, data curation, and machine learning. The first step is itself challenging, as there are so many access points in so many places to potentially useful data. Curation, the second step is where the bulk of the effort is directed, he related.

With regard to the stage of machine learning, Parthasarathi said, “We have to teach a machine to identify the non-obvious insights.”

Most data science projects in recent years have failed because off-the-shelf tools are inadequate to “listening” for non-obvious patterns, according to Parthasarathi. In response, Cyence focused exclusively on specific insurance problems, leveraged domain expertise and built its own capabilities. The result is the ability to find relationships even when direct information about a given risk is simply unavailable. For example, one might not be able to find information about a particular restaurant. But with a “data listening” approach, “You might find information from people who ate there,” Parthasarathi said. “We can do that for the universe of restaurants for which we have information: the machine places unknown restaurants in a grouping of similar known restaurants, and we can infer the attributes of the unknown from the known.”

“From that,” Parthasarathi added, “we can generate enough information to price a quote.” Guidewire’s Keith Stonell, managing director, EMEA, and Marcus Ryu at a meeting with journalists at Guidewire Connections 2017. (Click to enlarge.)

Parthasarathi revealed that Guidewire is now embarking on a research initiative called Project Owl. The project aims to digest data, insights and expertise from the vendor’s clients to derive industry insights. “We would like to get your guidance, learn what kinds of data sets you have explored, and what the results have been,” he said. “We can do this with the data infrastructure that Cyence has built, and because cloud makes it affordable, we can do this now with scale together.”

Big data and related analytics has become an industry preoccupation, even at CEO and boardroom level, noted Marcus Ryu, CEO, Guidewire, speaking at a meeting with journalists attending Connections 2017.

“Cyence is kind of a moonshot for the company and the whole industry,” Ryu commented. “What’s so different today is that insurers aren’t just using internal data and discrete external sources, but they’re gathering data from the outside world via Internet-based sources. The way you look for signals in all that noise is through new data science approaches.”

Ryu said that Cyence will provide its capabilities in standalone fashion for the near future. “They don’t need to be integrated [within Guidewire’s insurance platform] because they don’t require licensing our policy or claims system, but over time there is a logical integration,” he said.