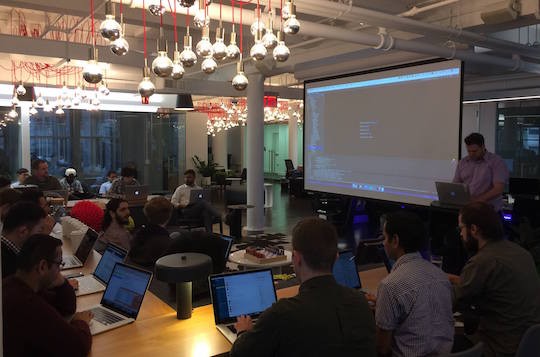 The term “startup” may conjure up images of free-wheeling, swashbuckling behavior so, Haven Life’s CEO Yaron Ben-Zvi prefers dubbed MassMutual’s New York-based online, direct distribution play as an “adult startup,” according to Matt Wolf, Haven Life’s Product and Actuarial Lead. “We have startup culture, but people here know they’re doing something important that’s going to have a significant impact on others at a critical moment during their lives,” comments Wolf, with whom we recently met at the online life insurance agency’s Manhattan offices. Haven Life’s headquarters looks and operates more like a software company than the offices of an insurance company. Its open plan and glazed conference rooms foster camaraderie and interaction in what Wolf calls “a very open and collaborative culture.”

Haven Life gives consumers opportunity for consumers to get an instant decision through its online application process. After the user submits an online application, an algorithm determines eligibility for coverage. Once approved, coverage can begin immediately—though users will then need to complete a medical exam within 90 days. The agency launched in Massachusetts in May 2015 and added eight states in October of that year. In Jan. 2016 Haven Life added 33 states, and in September introduced its InstantTerm product. In Jan. 2017, five more states were added, along with Washington, D.C. The organization’s New York headquarters now hosts more than 90 employees—compared to only 10 when it launched in 2015.

As much as Wolf appreciates Haven Life’s work style, that was not his particular reason for joining the company in Oct. 2016. “I’ve been at a couple of large carriers—great companies with great people attempting innovative things in their own way,” he relates. “But I constantly came to a problem that clearly needed to be solved.”

That problem hit home when Wolf helped a family member with the life insurance claims process. “Claims people are nice, but it’s a very difficult and protracted process, and does not focus on taking advantage of modern technology to make the experience the best it can be,” he remarks.

Wolf was interested in finding a place to work where he could participate in research and development aimed at using available technology to make the life insurance customer experience more personal, pleasant and efficient. Haven Life proved to be such a place, but Wolf says that he has learned that the important work isn’t just about taking advantage of technology. “I was approaching the problem with the idea that there are technology tools we could be using to make the customer experience better,” he says. “What I didn’t grasp was that it’s not just the tools but the way you interact with your customers.”

It all makes sense to Wolf, who says he grew up in a “DIY” style of living. “My father filed with TurboTax; I first rented an apartment without using a broker—that’s my personal preference: not to work through someone,” he says. “But when I went to buy life insurance, I found that’s not how it was done.”

Wolf’s concept of a startup is conditioned by firms such as Google which are constantly introducing new and useful functionality to established applications, such as Google Maps. Key to that iterative process is customer feedback. Haven Life has adopted this agile development process, which enables the team to continuously learn from customers and make rapid improvements. “That has been the most eye-opening thing for me,” Wolf notes. “Just because I happen to design insurance products doesn’t mean that I can’t learn from customers and adapt to their needs.”

Collaboration is key to maintaining a tight integration of effort to ensure both quality and rapidity of development, Wolf suggests.  “We’re growing very quickly and it’s important that as we do, we all stay in tune with what’s going on among various work streams,” he says. “In larger companies, it can be difficult to know what’s happening in all parts of the organization and things can get lost. We’re able to keep people in the loop and support each other in launches across the team.”

Because of the duration of a policy, selling and servicing life insurance is different than providing an app—which Google could simply turn off and replace at some point. “We can’t do that,” Wolf says. “But we can continually improve the customer experiences, adjusting and reacting a lot better than the industry has in the past.”

While he hesitates to describe Haven Life as the only life insurance company operating this way, Wolf does go as far as to say that the company is uniquely positioned. “By being a startup that is part of MassMutual, we own the entire stack from end to end, from first customer visit to when the beneficiary files a claim,” he explains. “This enables us to rethink the entire customer experience across the entire process and construct a product development framework that reacts to the customer’s needs.”