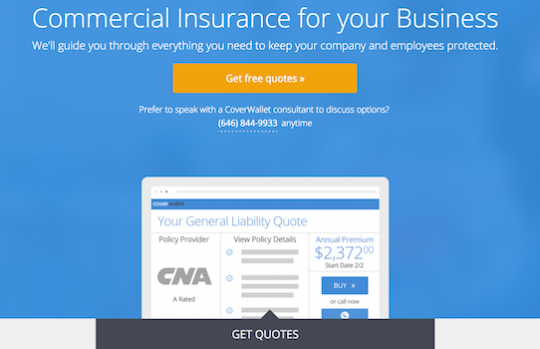 CoverWallet, a New York-based online insurance agency with a focused on small commercial business, has received $7.8 million in funding in a Series A round led by Union Square Ventures (New York). The startup has raised $9.5 million to date. CoverWallet, launched earlier this year, provides what it characterizes as a concierge-like service with a fresh approach to how small businesses deal with the complexities of commercial insurance.

Other investors in the Series A round include Index Ventures (San Francisco), and previous investors Highland Capital Partners (Cambridge, Mass.), Two Sigma Ventures and Founder Collective (both of New York). As part of the round, John Buttrick from Union Square Ventures joined the board of directors. Buttrick has previously led investments in startups reinventing other financial services industries, such as Lending Club, SigFig, RealtyShares, and C2FO.

“We are very excited to welcome Union Square Ventures, Index Ventures and executives who have a proven track record in building online brands that reinvent entire markets,” comments Inaki Berenguer, CEO, CoverWallet. “Buying and managing insurance feels analog and painful. With CoverWallet, we are building a customer-centric online product that is both beautiful and intuitive. We are reinventing how small businesses get insurance, saving time and money.”

Rashmi Melgiri, CoverWallet’s COO adds, “The $100B US small business insurance market is on the verge of a big paradigm shift. Business owners expect to deal with insurance online, in the same way they use consumer friendly online technologies to deal with banking, payroll, accounting or sales.”