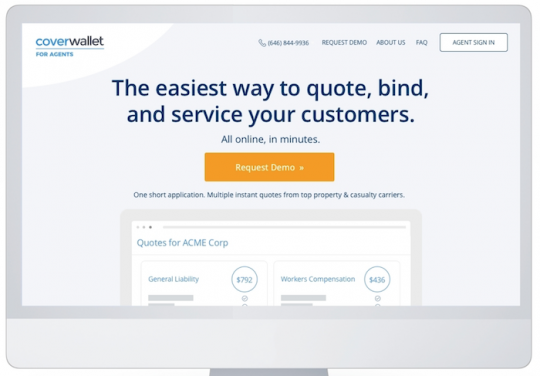 “Since launching our sleek and intuitive technology platform for small businesses, we have had countless requests from agents to work with CoverWallet,” comments Inaki Berenguer, CEO and Co-Founder of CoverWallet. “Today there are 40,000 insurance agencies in the U.S., and we are making it easy for agents to harness the power of data, design, and technology to serve more clients better and faster than ever before.”

CoverWallet for Agents utilizes the CoverWallet platform to provide agents with instant quotes, online bindable policies, and real-time proof of coverage. The platform uses what CoverWalled calls a dynamic online application that uses data and analytics, to provide agents instant access to quotes from top carriers for lines of business including general liability, BOP, workers’ compensation, and professional liability. The platform is currently integrated with large national carriers including Chubb, Starr, CNA, and AmTrust.

CoverWallet reports that it has more than quadrupled its business in the past year and has tens of thousands of customers. According to analyst firm CB Insights (New York), the small business insurance market is valued at $100 billion. With the launch of CoverWallet for Agents, the company increases its distribution to the millions of businesses that buy insurance through insurance agents. The new platform launched after a pilot program.

“We were able to launch CoverWallet for Agents re-using the advanced technology that we built from the ground up for our small business platform,” comments Aman Khaira, VP, Product, CoverWallet. “Agents are an integral part of small business insurance, and we are making it easy for them to leverage technology without needing to build their own complex integrations or to have direct relationships or appointments with carriers.”

“Being able to quickly get quotes for multiple carriers with competitive premiums is a huge advantage in today’s fast-paced, consumer-driven marketplace,” comments Joel Wagner, founder of WHINS Insurance Agency (Encino, California) and a member of the CoverWallet for Agents pilot program. “CoverWallet’s platform is amazingly easy, and we encourage other independent brokers to take advantage of their unique system.”

Sheri Bongers of Denver Insurance (Denver, Colo.) says, “CoverWallet for Agents is user friendly and has been quickly incorporated into my routine. The application is fast, generating immediate quotes. It’s easy to update, bind, and sign, and payment is done electronically.” Beyond the benefit of helping small businesses obtain coverage, agents using CoverWallet for Agents also benefit from the following, as described by CoverWallet:

CoverWallet reports that, with the launch of the new platform, Michael Konialian has been promoted to Vice President and General Manager of CoverWallet for Agents.