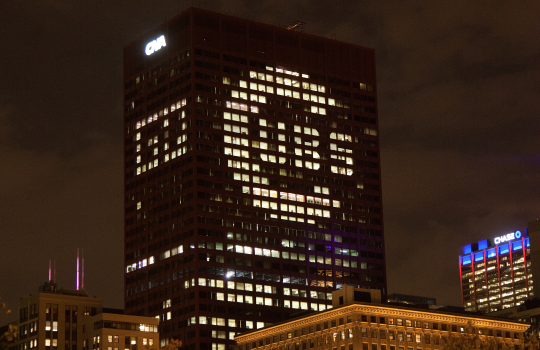 (CNA’s headquarters on South Wabash Ave., Chicago, lighted to honor the Cubs’ participation in the 2015 playoffs.)

Adding to the indignity of the Cubs losing to the Mets in the playoffs, CoreLogic has left Chicago off the top ten of its Windy City Ranking. The vendor reports that the latest data identifies Jackson, Miss., as the windiest city in the United States, followed by Springfield, Mo., Boston, Cambridge, Mass., and Shreveport, La.

See the table below for CoreLogic’s top-ten ranking of the windiest cities over a nine-year timeframe (Jan 2006-June 2015), with first-place Jackson recording a maximum wind speed of 99 mph and 153 separate wind events. Despite being nicknamed ‘The Windy City,’ Chicago ranks 50th. When looking only at wind speeds over the nine-year timeframe, three cities surpassed wind speeds of 100 mph, including Reno (126 mph), Westminster, CO (108 mph) and Round Rock, TX (103 mph).

The CoreLogic Windy City Ranking is generated by calculating the total force caused by all severe wind gusts of 60 mph or more for every wind event dating back to 2006. The analysis, which also takes into account the total number of wind events, assigns a numerical score ranging from 1-100 to 293 cities analyzed with data captured at the city center plus a 10-mile radius. Wind tends not to get as much attention as other natural hazards, such as hurricanes, floods or wildfires—which tend to cause widespread devastation in a single event, notes Lindene Patton, global head of hazard product development, CoreLogic. “However, wind-related damage is a serious and ongoing risk with about a third of all claims related to wind and hail,” she says. “Reviewing wind activity over multiple years helps identify trends and provide further scientific data to inform insurance coverage which, in turn, better protects homeowners.”

In fact, industry estimates indicate that wind damage represents as much as 20 to 30 percent of all insurance claims annually, according to CoreLogic. With such a significant percentage of insurance claims attributed to wind, the vendor says that its wind verification technology allows insurance professionals to verify if and when severe winds were detected at or near a specific location in order to make more precise damage assessments.

The CoreLogic Windy City Ranking uses proprietary wind verification technology to evaluate wind speeds and distinct wind events in 293 U.S. cities with populations of 100,000 or more. Unlike traditional wind records, which rely on airport-based and private weather observation stations that record data only at one location, CoreLogic wind verification technology captures wind data at a more property-specific level, the vendor reports. The data is localized and geography-specific so that even cities which are very close together, such as Boston and Cambridge, MA, can be measured independently.