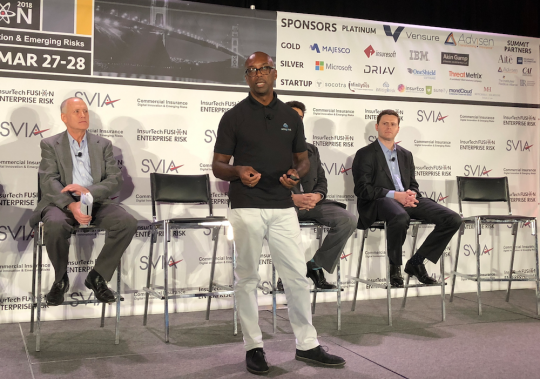 “We’ve been talking to many carriers and we’ve observed that commercial insurance is a bit behind,” commented Mike Connor, CEO and co-founder, SVIA, in his introductory address at the event. “We have also talked to the customer side—people managing risk and insurance—and we saw a huge need to drive commercial insurance innovation forward.”

The event combined presentations and panel discussions on the commercial insurance/enterprise risk management (ERM) theme, showcases of relevant startups, a vendor expo, and networking between all parties, including SVIA staff and partner organizations, vendor sponsors, members and other participants including carrier executives in IT, risk management and other disciplines, VC firms, analysts and media. The event’s sessions addressed solutions for strategic, reputation, operations, health & safety, cyber, regulatory, financial and risks.

SVIA FUSION served also as the occasion of news from the Accelerator, including the formation of a Consortium focused on commercial insurance and enterprise risk management, along with an interoperability framework and database to foster participant interaction; the creation of the new Vensure Fusion Fund II—an $80 million-plus fund managed by Vensure (San Francisco) in partnership with SVIA; and the Acclerator’s new relationship with law firm Akin & Gump.

An Industry Out of Step with Global Trends In his introductory address, SVIA’s Connor described social, political and technological megatrends that had yielded “a world connected” by huge amounts of data, analytics, workflows and systems that span the globe. “This puts us in a new world where risks are forming at a speed and complexity we’ve never seen before—many risks are yet to be identified,” he said. “Legacy commercial insurance and ERM were never designed for this—they have operated in a paper-based world that is vastly out of step with how companies work in the businesses they’re in today.”

“Today things can happen on the other side of the world and impact us in microseconds, from a risk standpoint—not only does business occur on a real-time scale today, so do the risks they face,” Connor continued. “That’s leaving enterprises, value chains and the industries and economies they’re part of tremendously exposed.”

Changes in the ways and speeds at which supply chains work demands that risk managers and insurers challenge their settled ways of behaving, suggested Connuil McEvedy, Chief Risk officer, DXC Technology (Tysons Corner, Va.) in the panel Industry Impacts: MegaTrends and Emerging Risks. “We are at an immature point professionally and at an industry level to say why a given decision is recommended and taken at a given time,” he said. That “immaturity” is felt both from a defensive risk-management perspective and an opportunistic new business perspective, McEvedy clarified.

Adjusting to a Real-Time World of Risk and Business Shah stressed the emerging importance of microservices for insurance core systems. “Interoperability is huge,” he remarked. “We have to embrace the API concept.” Shah counseled a vendor market direction whereby their software would be offered to insurers on the model of Apple’s App Store.

Raising a theme introduced by Connor and other speakers, Michael Gardner, acting head of SVIA Lab stressed the importance of inter-team and inter-organizational collaboration in insurance innovation. Many companies set up Skunkworks-like teams in a corner of their organizations, he noted. “That can be valid, but it imparts a particular flavor to what the companies get out of it,” he said. “People are beginning to realize that innovation happens at the boundaries of organizations, technologies, trends—so you have think about how you foster interactions at the boundaries.”