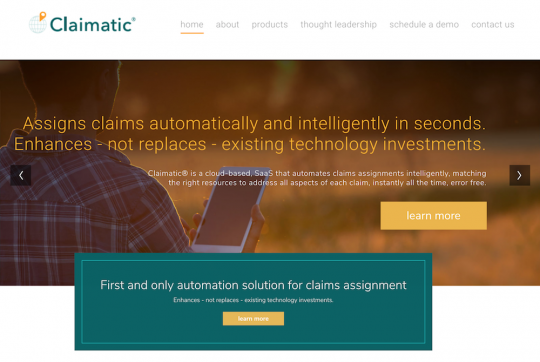 Claimatic, a San Antonio-based provider of automated claims solutions, has announced the latest version of its SaaS automation solution which the vendor says includes significant enhancements to its claims assignment optimization and advanced mapping features. Claimatic describes its offering as is a “bolt-on-brain” for claims workflow technology that makes existing insurer systems smarter, more valuable and more productive. Deployment requires minimal IT resources and affords claims managers full control when assigning claims to field resources, reducing time and effort to remediation, according to the vendor.

Claimatic aims at the intensely manual and often inconsistent adjuster assignment process that persists even after deployment of modern claims management systems. The process’ limitations often result in deployments made without consideration of an adjuster’s skills, licenses, proximity, capacity or availability. Consequently, long delays between first notice of loss, claims assignment and ultimate resolution can occur, especially during catastrophic events, causing dissatisfied customers and a high policy-turnover rate.  One of the causes of inefficiency is the lack of locational awareness or intelligent placement of resources with electronic geo-fenced territories that can drastically reduce windshield time, increasing productivity while reducing costs. “Our work with some of the largest carriers in the US has proven that the tasks required to match and assign claims to all the necessary resources remain largely manual, creating significant friction and increased productivity costs,” comments Larry Cochran, CEO and founder, Claimatic. “Claimatic is the first and only seamlessly integrated solution that alleviates the pains insurance carriers face when assigning resources by removing up to 22 out of 24 manual tasks per claim. As a plug-in SaaS solution that enhances carriers’ existing systems and processes in days, not months or years, Claimatic is garnering overwhelming support from some of the most sophisticated insurers in the US for its innovative, agile and robust automation features.”

Claimatic claims that its embedded mapping capabilities are unique to the industry. These feature  custom polygonal territories with which users can create and assign resources to electronic fenced geographic areas that collectively resemble a jigsaw puzzle. Organizing territories in this manner optimizes resource utilization by intelligently considering drive time and natural or man-made barriers that accurately reflect the real-life boundaries and borders of a territory, according to the vendor. In dense PIF (policies in force) areas, this can virtually eliminate the need for route optimization software as adjusters will never have far to go to their next assignment, according to a Claimatic statement.

The systems benefits are multiplied during catastrophe events, such as hurricanes or forest fires when insurance claims processes become overwhelmed and require teams of CAT adjusters to be deployed to affected areas for additional support, the vendor asserts. Enhanced CAT deployment features can quickly assign resources to new territories, while reflecting relevant parameters such as qualifications, availability, and capacity constraints, making it easier than ever to intelligently pre-position adjusters, en masse throughout the disaster zone.

“Implementing Claimatic into a claims assignment workflow assures assignment decisions that are more efficient, consistent, and compliant to regulations, all while increasing overall policy holder satisfaction,” the vendor statement adds.