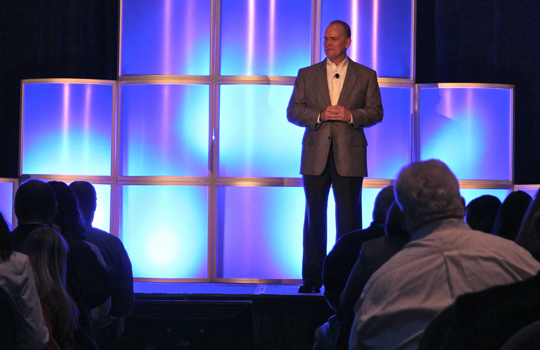 Long tenure in a senior position implies a coincidence of interest between an executive and his company. In the case of Mike Keller, the first requirement was a constantly challenging job, and at Nationwide (Columbus, Ohio; over $22.6 billion in 2012 total revenue) he has enjoyed that. Since becoming enterprise CIO in 2001, Keller has presided over several major, multi-year initiatives, such as a complete overhaul of the carrier’s financial and investment systems, and the creation of a common enterprise customer file. Currently he is overseeing a replacement of household name carrier’s personal lines policy administration system with Guidewire Software’s PolicyCenter platform. “My personality and leadership style is to always seek to improve – putting together strategy, executing and then, once the foundation is in place, continuous improvement to keep delivering value – that is just how I’m wired,” he relates. “Of course you never stay in these kinds of roles based upon what you do personally – the caliber of my team, the quality of delivery, and their focus on continuous improvement have been critical factors in my longevity.”When Keller arrived at Nationwide, there was much work to be done. Many aspects of the carrier’s technology were, if not actually broken, not functioning optimally, he recalls. Keller’s qualifications for addressing the insurer’s challenges included a stint as chief technology officer at BankOne (now Chase), and 15 years of experience working in various roles at IBM that acquainted him with a broad swath of technology issues across hardware, software and services.

“I think that a lot of what you learn in sales, consulting and services can be very useful skills for a CIO,” Keller says. “I spent a great deal of time dealing with customers in senior roles who may not have had an IT background, so I acquired the skills to bridge between IT and the business.”

Those skills are vital for technology leadership at a major insurance company that has grown through mergers and acquisition, Keller acknowledges – Nationwide’s corporate evolution resulted in the company having multiple brands and distribution channels and, with them, a significant legacy system burden. But he sees the complexity of the job as an important part of its appeal.

“There are other Fortune 100 companies our size or bigger that are actually less complicated,” Keller observes. “As a result, we’re very dependent on IT and there’s always plenty of work. Complexity and variation in the work has kept it always interesting and challenging.”

What has not been a challenge, however, has been working with Nationwide’s senior leadership, which views IT more strategically than many companies do, according to Keller. The insurer’s Business Transformation and Technology Committee (BTTC), was an early example of an insurer making technology a priority for its corporate board when it was founded in 2008, he reports.  Originally focused exclusively on IT, its role was expanded the following year to include business transformation programs across the company. As its name implies, the BTTC has a process reengineering mission – which is also reflected in Keller’s responsibilities as executive VP and CIO.

“My accountability is for business transformation and IT,” Keller notes. “I spend a lot of time on large transformational efforts – since we’re so heavily automated, we’re continually changing processes and underlying technology to enable the business to successfully adapt to changes.”

The BTTC represents a strategic orientation, characterized by a willingness to be patient about achieving a technology payoff, Keller asserts. It’s a perspective consistent with the company’s mutual philosophy and “on your side” ethos, which he believes contrasts with the shorter-term focus typical of many public companies.

“Long-term financial strength enables us to accomplish our promise to policyholder, and short-term earnings are never prioritized over that long-term mission,” Keller comments. “That outlook affects how we do business, all the way to how we seek to retain people.”

Keller believes that the BTTC has also been a factor in the length of his tenure, and his ability to take a longer view of technology strategy. Before the BTTC was established in 2008, the way IT generally got on the board’s agenda was through presenting some kind of risk or problem that needed to be addressed, he reports.

“If you only see the failure modes of an organization, you’re probably not going to think very highly of it,” Keller reflects. “When the senior leadership really understands what’s going on in IT, they’re less likely to think that the answer to problems is to replace the CIO.”

With the time that Keller has been given, he has established a technology strategy that he describes as being dedicated to delivering the right work the right way with the right people.

“We make it clear that IT exists as an organization – and a very big one, with roughly 5,000 people internally and about 3,000 external contractors – that job one is delivering the best possible return on the investments we make,” Keller says.

The “right way,” Keller explains, is as a capable and competitive IT organization with a solid delivery model. “That includes what we believe is a well-architected organizational structure with well-defined roles and career paths at both an individual and an organizational level,” he adds. “We have developed capability maturity road maps for the things we need to be good at, and I think we have a robust and effective governance process, whereby the right decisions get made by the right people.”

During Keller’s tenure, Nationwide’s IT organization has gone from a highly decentralized model to one that emphasizes common practices and standardized processes, following examples such as Toyota. “You need to develop common practices in order to get predictable, and once you’re predictable, you can drive continuous improvement,” Keller remarks.

As Nationwide ramps up its personal lines policy system replacement initiative, Keller is relying on his organization’s demonstrated predictability and the company leadership’s long-term view of IT strategy. While it’s too early to calculate the precise investment required, according to Keller, Nationwide is expecting the project to cost about $450 million, give or take $100 million.

Keller confides that other insurance CIOs have questioned the prudence of taking on the policy admin replacement project, and that the view within Nationwide’s senior leadership is that the job shouldn’t be taken on without the will to carry it through to a successful conclusion. However, Keller relates, “Everybody from the chairman of the board to the CEO says, ‘Yes, we want to do it and we’ll make the commitment.’” It is Nationwide’s capable IT organization that will ensure the initiative’s success, he insists. “If I were to leave tomorrow, I have confidence that the program would be sustained and that we’d see it through to success.”