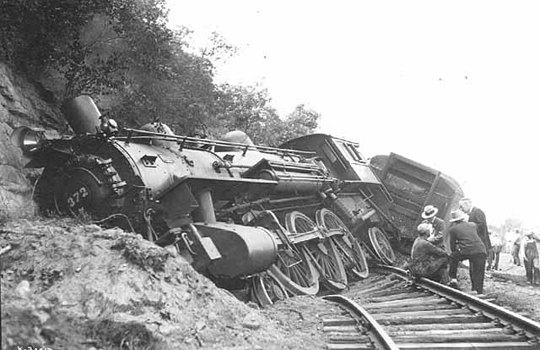 (Insurers upgrading policy administration systems are increasingly avoiding the above outcome, especially if they have modern systems, according to a new Celent report. Photo credit: Minnesota Historical Society.)

Good news abounds in Celent’s new study, “Benchmarking Policy Administration Upgrades,” co-authored by Mike Fitzgerald and Karlyn Carnahan. Based on a survey of 44 North American insurance carriers, the study found that the great majority of carriers either met budget (60.7%) or came below budget (10.7%), and most upgrade projects (64.3%) came in on time. Of the 28 upgrades covered in the study, all but five were reported as successful. “The unsuccessful efforts were all on legacy platforms, indicating that modern systems do indeed ease upgrade pain,” Celent concluded.

“A distinguishing feature of modern systems is a multi-tiered architecture – the separation of data from business rules (logic) from the user interface, etc.,” notes co-author Mike Fitzgerald. “Based on this architecture, it is logical that upgrades to the base system would be easier and this is what vendors of modern systems have claimed. This research is the first quantitative, objective validation of that claim.”

Among the reasons for challenged upgrade projects was skipping upgrades, which the survey found happened three times as many times as either point (e.g., 4.0 to 4.1) or next version upgrades. While more than a third (36.4%) of respondents had not upgraded their policy administration systems, the majority of respondents did point upgrades, which succeeded in all but one of 12 cases. Thirty percent of skipped version upgrades were unsuccessful.

Another key finding of the Celent study was that few carriers depend on internal resources (10.7%), preferring instead to ramp up their capabilities with assistance from vendors. The most commonly used vendor services were coding, configuration and testing according to Celent. “Some upgrade efforts use the package software vendor resources for coding and configuration and a separate, independent third-party organization to test the deliverable as a risk-mitigation approach,” the authors clarify.

About a third of Celent’s respondents noted that testing was the biggest difficulty associated with an upgrade, with an emphasis on user acceptance testing by the business. The study quotes a carrier respondent saying, “Unexpected integration errors and retrofits of existing modifications took longer and required more testing than planned.” 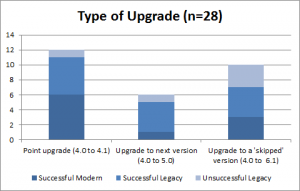 Other technical issues raised by respondents to the Celent survey included restructuring the technology to be browser-agnostic, dealing with database changes an implementing a new screen emulator. Some respondents reported complications complications from new bugs introduced over the course of the upgrade, and a carrier who skipped a version said its biggest difficulty was “plowing through several years of release upgrades at one time.”

Celent offered the following “key learnings” from the study: