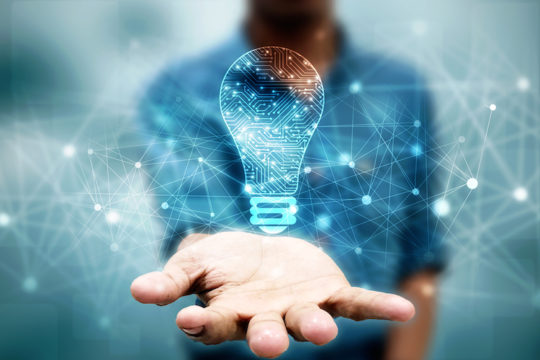 That technology is evolving rapidly is an obvious fact of contemporary life, and so its relevance to succeeding in business. Less apparent is how rapidly the property/casualty insurance industry is adopting emerging technologies. Boston-based research firm Celent asks insurers where they stand in a new survey-based study, “Property Casualty Insurers Weighing In On Emerging Technologies” (15 September 2020).

“If you were to take seriously everything you read in the trade press, you’d believe that the entire insurance industry is investing extensively in emerging technologies,” writes Karlyn Carnahan, head of Celent’s North America practice and author of the study. “Blockchain, robotics, natural language processing—all would be seen as ubiquitous. Or, you’d believe the entire industry is still archaic, with old technology in place at most insurers.”

How and to what extent P&C insurers are actually investing in emerging technology is conditioned by four major factors, according to Carnahan:

These factors themselves fall within a strategic response to macroeconomic conditions and they can play out very differently depending on the size of an insurer and lines of business it sells, Carnahan says. Many P&C insurers are involved in legacy core system transformation, which creates a significant drag on other endeavors. However, to provide competitive services to customers and agents, they remain motivated to explore new technology and invest in it—where it’s likely to result in a return.

“They don’t see it as a need to invest in emerging technologies, but as a need to deliver specific capabilities that those technologies can satisfy,” Carnahan clarifies. “They’re very focused on satisfying customers, maintaining financials, driving efficiencies and keeping costs down.”

Surge of Interest in Customer Experience

“There’s been a surge of interest in all the technologies needed to manage the customer relationship in a world of shelter-in-place, such as collaboration tools, video communications, mobile apps—all the things necessary to communicate and collaborate when you can’t go and see other human beings,” Carnahan says. “How do you do a loss control inspection or adjust a claim?”

The survey also found that insurers are far less focused on innovation per se than they were prior to the pandemic. In a Feb. 2020 study by Celent, 67 percent of respondents said innovation was a significant driver. In the September study, only 20 percent had that response.

“If we had to speculate, we’d guess that prior to the pandemic, when the first study was done, insurers were working on ensuring their next AM Best innovation assessment would generate the scores they’re looking for,” Carnahan says. “But after the pandemic, insurers are more focused on trying to recover revenue lost as businesses slow down or go under, and are looking at how to operate more efficiently in order to handle the increase in transactions—premium reduction endorsements, cancellations, and new business quotes—with the staff they have. 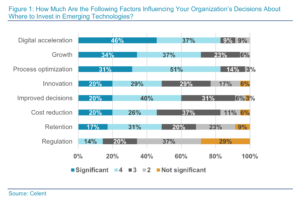 The variability in insurers’ responses about emerging technology priorities (see Fig. 1) was heavily conditioned by the size and lines of business of a carrier. For example, all Tier 1 respondents (over $5 billion in annual revenue) said that growth was a significant driver of investment in emerging tech, with improved decisions being their second highest driver. Sixty-seven percent said process optimization was highly important. However, no Tier 2 insurers (annual revenue between $1 billion and $5 billion) cited improved decisions as a significant driver, ranking digital acceleration and process optimization highest. Of Tier 5 insurers (less than $100 million in annual revenue), 66 percent identified process optimization as a significant reason for investment in emerging technology, and 50 percent also cited improved decisions.

When it comes to attitudes, there was similar diversity of opinion, which Carnahan also attributes to the different sizes and lines of business of insurers. What all have in common is discipline; they are neither enamored nor dismissive of emerging technology but are simply focused on what they need to run their business most efficiently and profitably.

“If a carrier is not investing in a given emerging technology, it’s not because they’re skeptical but because they haven’t yet figured out how to use it to get value,” Carnahan says. “Very few have invested in blockchain, for example, but when they see a use case that aligns with their strategy and goals, they will.”

Carnahan stresses that declining to invest in a particular technology doesn’t mean that insurers aren’t studying it. They’re staying on top, researching even some of the more far-out technologies, such as quantum computing,” she insists. “However, they’re pragmatic, investing only in what they need to compete effectively.

Smaller carriers need to be even more assured of the value of a given technology, Carnahan says. “They don’t the same resources for experimentation as the large carriers,” she notes. “However, they do have the advantage of being able to make decisions much faster, and they also have a much more focused target market: it’s easier to satisfy the needs of a smaller niche than having to allocate for a variety of markets.”

In an absolute sense, observers might be able to argue that P&C insurers are slower adopters than other industries, Carnahan implies. However, in terms of addressing their competitive needs within their constraints, she says their pace of adoption is impressive. P&C insurers have had to make huge investments in core systems, but their response to the rigors of the pandemic showed that they can be nimble, according to Carnahan. “It’s impressive what they did in a week or two, supporting remote work and providing collaboration tools and other relevant capabilities,” she says.

The pandemic initially had the effect of stalling big projects, as revealed by snap polls done by Celent shortly after shelter-in-place orders took effect.  However, Carnahan says, “By June, they were back up and running.”