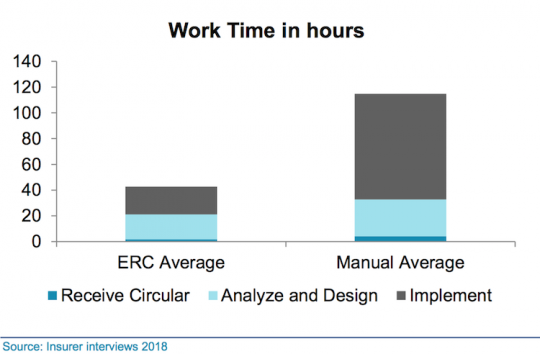 Since the whole point of automation is to make a given process more efficient, one would expect that ISO’s (a division of Verisk; Jersey City, N.J.) release of ISO Electronic Rating Content (ERC) in 2010 would have introduced significant efficiencies into the product management process of insurers depending on ISO for its rating services. Research firm Celent (Boston) recently published the report “Does ISO ERC Deliver the Goods?”. The subtitle of the report speaks for itself: “Spoiler Alert: Yes”; however, the report goes further to not merely affirm but to gauge the impact, which it found significant. “ISO ERC was launched with great promises of creating efficiencies,” comments Karlyn Carnahan, author of the report and Head of Celent’s Property/Casualty Practice for The Americas. “We decided to test that proposition and compared insurers using ERC with those that handle product changes in a more traditional manner.”

The results were impressive, according to Carnahan. “While not all insurers will see these results, ERC insurers are more likely to be current, more likely to have standardized on ISO, and can handle circulars with 63 percent less work time and 70 percent less elapsed time,” she says.

In addition to the direct benefit of efficiency in handling ISO circulars, insurers using ISO ERC also enjoy the benefit of applying gained time to higher-value activities related to pricing, according to Carnahan. “They’re doing a lot more benchmarking against competitors, and using analysis to do things like look at stacking of their business rules and how they might impact down the line,” she comments. Insurers using ISO ERC are also enjoying gains in the process of ingesting rate changes into their systems. “Carriers don’t have to create requirements because, in effect, ERC is the requirements,” Carnahan observes. “An insurer using ERC can implement an average circular in 22 hours, including testing—that compares to 82 hours for an insurer using traditional processes.”

ERC insurers are also better able to take rating changes when they are released, as opposed to processing changes in batches periodically. “ISO releases 75 circulars a week, so if you’re a nationwide carrier writing every LOB you have a lot to deal with,” she says. “ERC lets carriers take the changes as they occur.”

Reducing the Need for Costly Skills

By shifting to ERC insurers are also able to reduce the need for costly programing skills. “The process of implementing the changes no longer requires highly skilled and expensive, letting carriers can move tasks down to a less expensive business analysts,” Carnahan says.

Carnahan cautions that Celent’s analysis was based on creating a composite insurer looking at an average circular. Given that the mix of business that an insurer writes in terms of the number of states and lines of business will impact complexity, the benefits of ERC to insurers can differ. She details other caveats that can condition the amount of efficiency a carrier can gain, including the following:

However, even bearing these considerations in mind, ISO ERC presents clear advantages, and in many cases these exceed expectations of what automation might deliver, Carnahan stresses. “You would think if you could get 20 percent improvement in your product change agility, that would be great,” she says. “But what our study shows ISO ERC can deliver up to 63 percent reduction in work time for handling an ISO circular from start to finish—imagine what you could do with 63 percent more staff or work hours.”