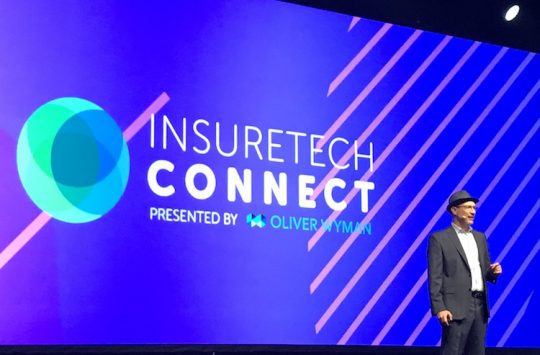 Honig noted the event’s having quadrupled in size since its premiere two years ago, with this year’s InsureTech Connect counting over 6,000 participants. Appealing to the value of quality as well as quantity he noted that a third of attendees were of VP level, and other third belonging to the C-suite. He added that over 1,000 attendees were from abroad. “If no one from U.S. showed up, we’d still have one of the largest InsurTech events globally,” he said. “Sharing of perspectives makes for a much better event.” Honig noted that this year’s event involved greater participation from insurance regulators. He urged attendees and exhibitors to welcome and embrace regulators. “They want to be part of the conversation, and one way or another, they are going to engage with the innovators,” he said.

Reviewing issues addressed at last year’s event, Honig raised the issue of whether insurance would be “API-ified,” and noted that long-term vendors are beginning to make their systems available via APIs.

He added that his best-received question last year was whether insurance was destined to remain an industry with low customer engagement. “Will it become something that people engage with, that becomes part of their routine—like a toothbrush?” he asked. “I don’t know the answer, but if it does become something people engage with, that will probably be through the Internet of Things.”

The Importance of Culture

Talent and culture remain under-discussed issues for insurance innovators, Honig cautioned. “Pay attention to the language people use,” he counseled. “Do people talk about actuarial science or data science? Do they talk of having IT department or software engineers? Those terms are representative of culture in an organization.”

Honig commented that in discussions of InsurTech, one often hears two antagonistic perspectives. “You sometimes get the reaction, ‘Startups are doomed, they don’t understand risk, capital!’ Other reactions are that sky is falling and insurers doomed,” he said. “Neither is right in my view. Both have an important role to play in catalyzing the digital revolution happening in insurance.”