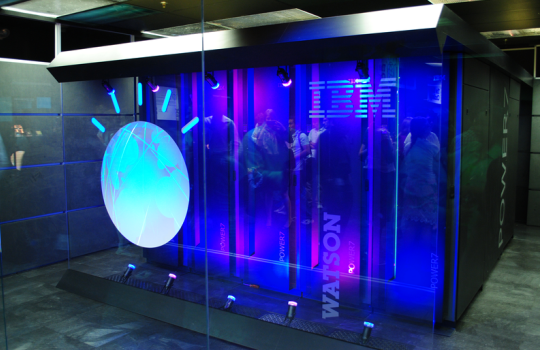 If underwriting is a combination of art and science, then insurance underwriting would seem a promising field for IBM Watson, an artificially intelligent computer system that can answer questions in natural language. Swiss Re (Zurich), is acting on that potential through an initiative with IBM to develop a range of underwriting solutions using Watson’s cognitive computing capabilities. The reinsurer will also establish a dedicated Center of Competence for cognitive computing in collaboration with IBM with the goal of developing an industry-wide range of solutions.

Watson will provide decision support for Swiss Re’s underwriters, allowing them to combine their experience and insights with the IBM system’s ability to process vast amounts of unstructured data and continuously learn from its interactions with humans and data. Through the power of Watson, Swiss Re will be able to act promptly on emerging trends, identify operational issues or opportunities in real time and price risk more accurately, according to a joint statement.

A Vision for Cognitive Computing

“Systems like cognitive computing can continuously read the ever growing amount of information while helping us connect the dots and making it easier to interpret that information in the right context,” comments Thomas Wellauer, Swiss Re group chief operating officer. “Swiss Re and IBM are collaborating to establish a vision for cognitive computing at Swiss Re and the wider insurance industry.”

“We are continuously looking for clients who can help us train Watson on new industries,” comments Mike Rhodin, senior VP, IBM Watson. “Swiss Re’s strong heritage of leadership in reinsurance, their global reach and breadth of data across several areas of the industry, combined with Watson’s ability to learn and provide insights into vast amounts of data, make this a particularly exciting venture.”

It would be interesting to see where on the risk complexity scale Swiss Re and IBM decide to train Watson, notes Mike Fitzgerald, a senior analyst with Celent (Boston), and author of the researcher’s recent report on artificial intelligence/cognitive computing and related capabilities. Published this summer, the report, Machine Intelligence in Insurance: Designing the Aware Machine, details several use cases of the technology that translate to insurance.

Insurers have tended to restrict the use of rules-based systems to underwrite relatively uncomplicated, short-tail lines of business, such as personal auto and umbrella, while taking a traditional approach to more complex risk, according to Fitzgerald. “Underwriting sophisticated, loss-sensitive, global risks, for example, remains very much a craft characterized by manual processes and heavily dependent on the knowledge and talent of the underwriting and broker working the account,” he says.

Fitgerald anticipates that the ways Watson is applied to Swiss Re’s business will have parallels to the work that IBM is doing in cancer diagnosis. “I am excited at the possibility to use the capabilities of such platforms to more accurately and consistently identify and price risk in these multi-location, multi-operation, multi-peril situations,” he says. “If such platforms can help physicians deal with the massive amounts of information involved in cancer research and diagnosis, they certainly can assist an experienced underwriter more accurately price risk, even in the most complex situations.”