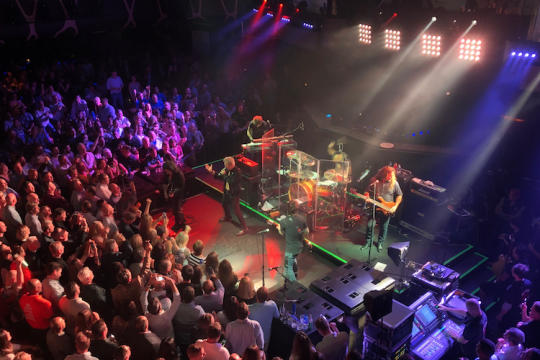 (Billy Idol performing at the ITC closing event at the MGM in Las Vegas.)

Attendees of InsureTech Connect (ITC)  in Las Vegas this week drew a breath when the event’s co-founder Caribou Honig related in his opening remarks that he had recently been shot. The incident occurred as a result of his attempting to photograph a man who had stolen his neighbor’s bicycle. “I am so thankful I have life insurance,” Honig commented, using the example to stress the social importance of insurance and the important mission of attendees and the entrepreneurs who provide solutions to them. Honig reviewed how far the insurance industry had come since the first ITC, in 2016. InsurTech, he said, is now a cross-border phenomenon, adducing in support of the assertion that startup carrier Lemonade is taking its direct-to-consumer model to Germany. Another major sign of progress was the existence of unicorn M&As, illustrated by the example of Prudential acquiring Assurance IQ for $2.35 billion. “This level of investment gives more fuel and capital for the next round of InsurTech investment,” Honig commented.

Insurers’ interaction with the InsurTechs they acquire could be understood through analogy to a virus, Honig suggested. The acquired company spread its DNA across the acquirer and transform it—or the “host” company could, in effect, send out its antibodies to prevent that infection. “The key element is that the acquiring company has to grant the management of the acquisition authority over some part of that mothership,” Honig advised. “That has the chance of turning it into a retrovirus.”

Honig spoke of companies from other industries embarking on insurance ventures—such as Porsche’s rollout of a branded per-mile product in June—though often with the help of established insurance entities on either the carrier or distribution side. “This bespoke product is enabled by an MGA, he observed.

Expressing his enthusiasm for the API economy, Honig said he anticipated an “API-ification of insurance,” whereby various components could be introduced into the insurance value chain, connected modularly in the fashion of Legos. “APIs can have a real impact in distribution, taking out the friction of connecting someone with a product to someone with a channel,” he said.

As to whether API ecosystems had the potential to disintermediate brokers and change the structure of the business, Honig expressed skepticism but said that channel partnerships do pose a real threat to the existing broker model.

Referring back to new business models such as Porsche’s insurance venture, Honig speculated as to whether insurance might someday be so embedded in other transactions as to be invisible. The author of this report found the audience less than enthusiastic in response to Honig remarking that, “Consumers would not realize that they’re buying insurance as part of a bundle.”

What’s Driving Insurance Innovation and Where is it Headed?—ITC’s Caribou Honig