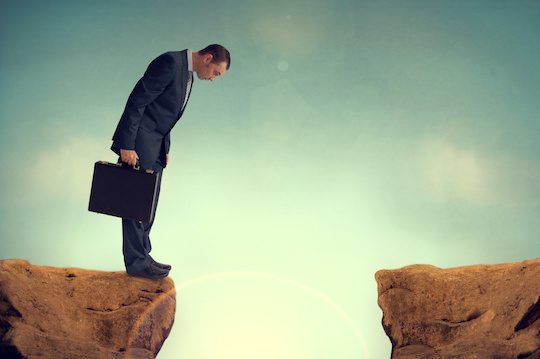 Large insurance corporates love predictability and certainty. They have a focus on cost, efficiency, profits and market share. They reward senior executives accordingly. In achieving these goals, they try to eliminate risk, avoid being a fast-follower and have a tendency to acquire rather than innovate and build.

So, given this overarching culture, some key questions tend to arise when a new idea comes up; “Where is the business plan?”, “What budget is this going to come from?”, “What is the ROI?”

Of course, the answers to these questions are not known because we are dealing with uncertainty—uncertainty about the idea, the cost, the market, the technology and that makes managers nervous. Unfortunately, it’s also these types of questions that kills innovation.

Research conducted by organizational psychologists and published by Cornell University entitled “The Bias Against Creativity: Why People Desire But Reject Creative Ideas,” by Mueller, Melwani, Goncalo, found that as a culture, and in fact as individuals, we’re deeply biased against creativity. This bias indicates a fascinating paradox at the heart of our common attitudes toward creativity: at the same time that we desire creativity, we also fear it. This widespread bias then acts as a “concealed barrier” that innovators must be prepared to confront when attempting to gain acceptance for novel ideas.

So how can we overcome this apparent bias in established businesses? How do we de-risk new ideas?

Talking regularly to senior corporate executives who are trying to create innovation practices and instill a culture of innovation in the large organizations they work for, three main approaches are being pursued: appropriate incentives, appropriate methodologies and appropriate metrics. Appropriate, that is, to innovation, rather than business as usual.

Incentives are probably the weakest area they see due to a misalignment with “normal” management incentives. The senior executives, though, have managed to introduce financial incentives for staff for the submission of promising or selected ideas, along with a time allowance given per week to work the idea to the next stage. They may also deploy equity incentives—see the Dragon’s Den scenario below. However, as I stated earlier, incentive examples are still few and far between which indicates there is work to be done here, especially at a top level.

Most effort has tended to fall into the process by which an idea can be submitted, selected, tested, retested, developed and launched—building a runway.

Insurers commonly use a staged process to which all can submit ideas with clear go/no go gates along with metered funds released as ideas gain traction. Stages between these gates have become very agile; small teams, rapid test, build-and-learn processes, iterative steps, making informed adjustments, failing fast. The testing is based on defining a hypothesis, creating a test, and analyzing the results. Selected ideas are invariably based around problems to be solved, especially those addressing customer needs. However, once an idea is ready to scale, the handoff to operations emerges as a weak link requiring more attention much earlier in the process.

To address trying to fund promising ideas out of existing budgets, some companies set up an innovation fund which then finances the staged process. In addition, some companies have an incubation or acceleration group which helps teams through the stages while not taking control.

Companies may use a Dragon’s Den process, where any employees can create a team, have an idea, build a case and pitch that idea to management. Shortlisted teams are given a significant amount of money to build a prototype over a period of three months. Then a winner is chosen and a new business started with team members having equity.

Whatever the process to drive innovation, when a new idea is being developed, the outcome is uncertain and the degree of confidence in any figures in the 12-24 month timeframe is low. So what metrics are needed to help measure success?

Often companies use three types of measures as ideas progress though stages as they move towards certainty.

Firstly, activity metrics. These summarize the quick facts and stats relating to an innovation project under management. This includes the number and type of ideas received, the current number of ideas in the different stages, budget and actual spend, history, etc.

Although a fairly simple summary, the idea with these type of metrics—which will vary per project—is to reduce uncertainty and build confidence so you can build a more accurate business plan and justify the funds needed to scale. One could picture this as moving from soft metrics to the hard ones which corporates know and love.

In the words of Eric Ries from The Startup Way, “…you will notice a number of paradoxes. Overall, even among old-fashioned companies that are focused on short-term results (such as quarterly reports), most initiatives are impossibly slow, are risk averse, and invest on an all-or-nothing basis. Modern management requires a long-term philosophy coupled with extremely rapid experimentation to discover which strategies will support a long-term vision.”

Developing the right incentives, methods and metrics for your context will help enormously in your innovation journey.

Innovation Labs in Insurance: Dead as a Dodo, or Finally Alive and Kicking?