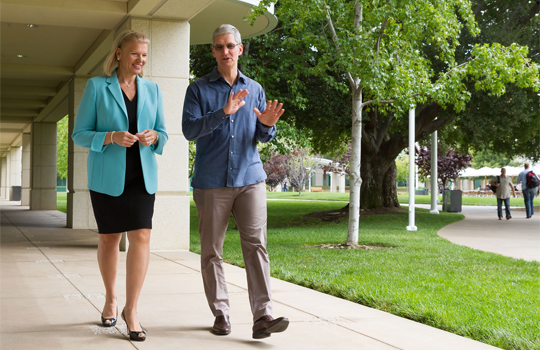 Apple and IBM have announced an exclusive partnership that the firms say will combine the strengths of each company to transform enterprise mobility through a new class of business apps, brining IBM’s big data and analytics capabilities to iPhone and iPad users. The resulting offerings will be called IBM MobileFirst for iOS solutions.

The agreement, along with its associated forward-thinking plan, creates synergy between these two technology players and will be a positive development for the insurance ecosphere, according to Jamie Bisker, a Columbus, Ohio-based senior analyst with Aite Group. “IBM’s internal efforts to securitize the iOS platform for its own use, and the depth of its world-leading cyber security efforts have clearly positioned the company for this opportunity,” Bisker comments. “The ubiquity of Apple’s devices and their reputation for quality, ease of use, and principled designs will aid corporate clients, and insurers in particular as they more deeply engage a connected world.” A joint statement from Apple and IBM says that the partnership aims to redefine the way work gets done, address key industry mobility challenges and foster mobile-driven business innovation in four core capabilities:

• a new class of more than 100 industry-specific enterprise solutions including native apps, developed exclusively from the ground up, for iPhone and iPad;

• new AppleCare® service and support offering tailored to the needs of the enterprise; and

The vendors characterize the IBM MobileFirst for iOS solutions as drawing on distinct strengths of the companies, including IBM’s big data and analytics capabilities, with more than 100,000 IBM industry and domain consultants and software developers behind it, fused with Apple’s famed consumer experience, hardware and software integration and developer platform. The vendors assert that the combination will create apps that can transform specific aspects of how businesses and employees work using iPhone and iPad, allowing companies to achieve new levels of efficiency, effectiveness and customer satisfaction, with unprecedented speed and ease.

As part of the IBM MobileFirst for iOS pact, IBM will sell iPhones and iPads with industry-specific solutions to business clients on a global basis.

“iPhone and iPad are the best mobile devices in the world and have transformed the way people work with over 98 percent of the Fortune 500 and over 92 percent of the Global 500 using iOS devices in their business today,” comments Tim Cook, Apple’s CEO. “For the first time ever we’re putting IBM’s renowned big data analytics at iOS users’ fingertips, which opens up a large market opportunity for Apple. This is a radical step for enterprise and something that only Apple and IBM can deliver.”

For insurers, the new agreement means that IBM will be pushed to deliver apps that meet not only the requirements of iOS and its environment, but to meet the expectations of Apple’s user base, according to Aite Group’s Bisker. Furthermore the integration of IBM’s cognitive computing capabilities via mobile device opens up the possibility of new forms of risk mitigation for both personal and corporate use. IBM defines cognitive computing as systems that learn and interact naturally with people to extend what either humans or machine could do on their own, helping human experts make better decisions by penetrating the complexity of big data.

“By integrating provisioning, security and analytics into apps on Apple device that IBM will sell to insurers, the concept of cognitive edge computing will take fraud detection, remote underwriting, and claims processing to a new level of performance,” Bisker projects.

Both policyholders and insurance distribution channels will benefit from cognitive computing, Bisker stresses. “Policyholders will begin to have the tools that make personal risk management a reality rather than having it be held captive to legacy insurance business models,” he says. “Distributors will access marketing and sales tools on the fly, and offer superior service.”

The vendors’ cite a “shared vision” for the partnership to provide business professionals the combined capabilities of iPads and iPhones with their companies’ knowledge, data and analytics, and workflows through what Apple and IBM characterize as the following essential elements of enterprise mobile solutions:

– Mobile solutions that transform business: The companies will collaborate to build IBM MobileFirst for iOS Solutions—a new class of “made-for-business apps” targeting specific industry issues or opportunities in retail, healthcare, banking, travel and transportation, telecommunications and insurance, among others, that will become available starting this fall and into 2015.

– Mobile platform: The IBM MobileFirst Platform for iOS will deliver the services required for an end-to-end enterprise capability, from analytics, workflow and cloud storage, to fleet-scale device management, security and integration. Enhanced mobile management includes a private app catalog, data and transaction security services, and productivity suite for all IBM MobileFirst for iOS solutions. In addition to on-premise software solutions, all these services will be available on Bluemix—IBM’s development platform on the IBM Cloud Marketplace.

– Mobile service and support: AppleCare for Enterprise will provide IT departments and end users with 24/7 assistance from Apple’s award-winning customer support group, with on-site service delivered by IBM.