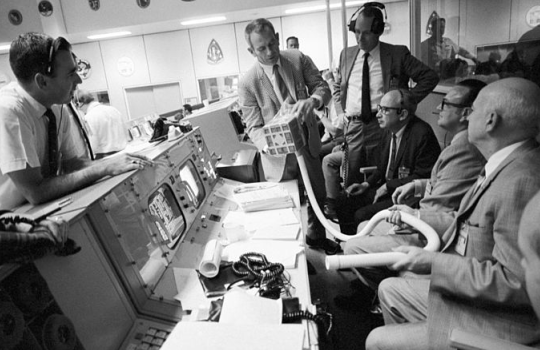 Cigna CIO Mark Boxer, as quoted in today’s IIR newsletter’s top story, remarked in a speech at PegaWORLD that insurance carriers must apply the kind of creativity that got Apollo 13’s crew home safely to insurance innovation challenges. As with our recent metaphor of Mt. St. Helens’ 1980 eruption for Google’s reshaping the insurance landscape, the Apollo 13 metaphor has its limits. And yet, it raises interesting parallels to insurers’ innovation imperative and how they should react to it. Readers may recall that a failure the Apollo 13 mission’s Service Module required aborting the planned moon landing and prematurely turning back to earth. The Service Model accident had severely limited the available oxygen in the Command Module, necessitating the astronauts’ using the Lunar Module (LM) as a lifeboat. The LM didn’t lack oxygen but it lacked a mechanism for filtering exhaled carbon dioxide from the air, and the Command Module’s filtering device was physically incompatible with the LM’s system. To make a long story short, NASA’s Flight Control, led by Flight Director Gene Kranz, had to use limited resources to, essentially, match a square peg to a round hole and create what was known as the “mailbox” device (see illustration above) that enabled the astronauts to breath for the duration of their stay in the LM before returning to the Command Module for reentry into earth’s atmosphere.

Of course, nobody’s life is at stake in the insurance industry, and any given carrier’s survival timeline extends beyond many months into  years. However, insurers are similarly challenged to rapidly deploy limited resources and achieve an integrated functional environment between disparate, incompatible systems. One such example might be The Hanover’s four-month initiative to deploy service capabilities for its Platinum Experience package personal lines policy, which we also feature in today’s IIR newsletter. Gene Kranz with a strange man in a skirt, many years after his NASA career.

But there’s another very important way in which insurers face a similar challenge to that of NASA Flight Control: in both cases, highly competent people are working against time to solve a technical problem. However, arriving at a successful outcome is as much a moral  problem as a technical one; that is, all the technical experience in the world won’t deliver success if the team working against a problem isn’t motivated to access all their creativity and to secure all their confidence and commitment to success—and that will require genuine leadership from CIOs and other senior technology leadership. Insurance CIOs would do well to take a page from Gene Kranz’s book, so to speak.

Apollo 13’s crew would never have made it back to earth alive if Flight Control didn’t have the morale, urgency and sheer determination to succeed that animated their creative efforts in 1970. Similarly, insurance carriers may have an abundance of technical resources at their command, but without a sense of urgency, a sufficient level of morale that sparks creativity and genuine commitment, their survival over the longer term remains uncertain.