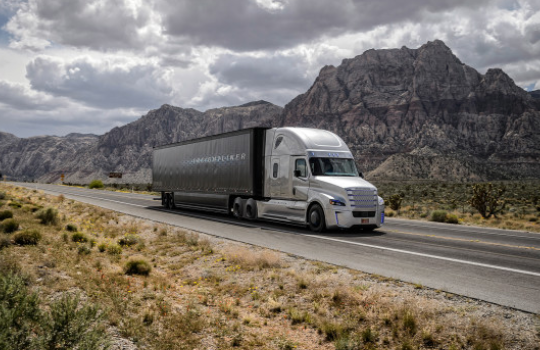 (Daimler Freightliner Inspiration, chosen to be the first autonomous commercial vehicle to operate in the U.S. Source: Daimler AG.)

If insurers needed a news event to convince them of the reality of autonomous vehicles, they had one last week, when the governor of Nevada posed with a Daimler executive to mark the licensing of one of the manufacturer’s trucks as the first autonomous commercial vehicle to operate on U.S. roads, albeit in experimental fashion. If insurers were wondering just how such developments are likely to impact their industry, and what that should mean for what they should do and when, Munich Re provided some timely suggestions in a report, “Autonomous Vehicles: Considerations for Personal and Commercial Lines Insurers,” published last month.

The Munich Re report appeals to insurers to embrace the emergence of autonomous vehicle (AV) technology not only as a disruptor that creates business challenges and opportunities for individual insurers, but also as an occasion for the insurance industry to reassert its role as a catalyst for safer living. Just as the industry has worked toward safer driving through the Insurance Institute for Highway Safety (IIHS)—famous for its iconic crash test dummies—it now has an opportunity to have a more profound impact.

(Related: Q&A: HSB CEO Greg Barats on the Engineering-Focused Insurer’s investment in the Internet of Things)

AV technologies, the report notes, “offer an opportunity for us to advance another milestone in vehicle safety, going beyond keeping people safe in a crash to avoiding the crash altogether.” That being the case, insurers have a twofold role, according to Munich Re:

…to enable a technology that has potential for significant positive impact on vehicle and highway safety while also helping our clients to recognize and manage the impact of AV technology on their businesses. Insurers and reinsurers who understand the issues will be in the best position to stay ahead of market disruptions and capitalize on opportunities.

The two most disruptive consequences of AV technology are likely to be fewer accidents and a shift in liability, the report suggests. The first implies fewer losses and, consequently, lower premium; the second implies changes in responsibility for losses, which has fundamental implications for product.

However, the picture the report paints includes significant nuances. For example, while AV technology has the potential to reduce the frequency of accidents by reducing human error, it could simultaneously give rise to new and potentially costly liability exposures. Some of the loss implications have to do with the complexity and expense of AV technology, but the more profound effects are driven by how the technology is likely to determine which parties are responsible for loss.

Liability may be difficult to assign in Levels 1-3, where control of the vehicle vacillates between driver and systems. However, at Level 4, liability is likely to shift according to the assumption of control by systems. “The more autonomous the vehicle, the more exposure to the manufacturer,” the report notes.

Munich Re notes that because data is integral to the proper functioning of AVs, cyber liability exposures arise. The technology could also affect underwriting classes within liability products. “Currently class codes exist for computer manufacturing and auto manufacturing,” the report says. “However, since there is a computer technology involved within the auto manufacturing process, there is potential for a hybrid insurance classification to be developed that contains features of both classes.”

The report explores various liabilities faced by manufacturers but also stresses liability implications for both commercial and personal operators of AVs. Though vehicles at the NHTSA’s Level 4 imply basic responsibilities for manufacturers, operators may be liable through a responsibility to properly maintain the relevant equipment. “There is also a potential for the vehicle to be considered a permissive user or an agent of the operator, thus making the operator responsible for a loss,” the report cautions.

The novelty of AV technology also implies new coverages, many of which pertain to very costly equipment. For example, whereas traditional auto policies generally exclude electronic equipment that transmit and receive data, AVs depend on such technology. Also, AVs have the potential to resemble living quarters, complete with features such as entertainment systems and furnishings not typical for automobiles today.

The factors influencing the probability of loss differ significantly between manually operated vehicles and AVs, so underwriting tools are likely to be impacted by increased adoption of AV technology, the report notes. There will likely be a severity trade-off between reduced frequency of loss and high initial costs of AV technologies. Ultimately, data will be a critical factor in risk assessment as AVs are—quite literally—data driven. However, insurers will face challenges related to data quality and accessibility. Accessing the most useful data types will depend on the acquiescence of regulators and the general public. Munich Re identifies the following potentially important data types, many of which could be considered sensitive, and thus their acquisition could be considered intrusive.

Public concerns about Big Brother-like intrusions into their daily lives constitute one of many impediments to the broad adoption of AVs. Privacy concerns loom large, particularly for personal lines adoption of AV technology, but current popular sentiment is more about functionality, Munich Re suggests.

“It seems the general public isn’t ready to give up control of their vehicles or trust that a computer might make better decisions at the wheel,” the report observes. “Even with a theoretical 2015 government mandate in place, IIHS predicts vehicles equipped with crash-avoidance and lane-keeping systems [which fall short of NTHSA Level 4 autonomy] would not reach 96% of fleet penetration until 2035.”

Regulatory hurdles are likely to also slow adoption, the report suggests. “Currently legislation has focused on testing of AVs on public roads rather than envisioning AVs in the consumer marketplace,” the report notes. Before mass adoption, either personal or commercial, occurs, will likely address a host of considerations related to AV, including licensing and certification of vehicles, infrastructure, cyber security and safety standards, according to Munich Re. “In insurance, regulators may seek to prevent adverse selection and moral hazards, [and] protect privacy and personal information.”

“In any case,” the report concludes in understated fashion, “Insurers will likely be impacted, and those who remain informed on autonomous vehicle issues will be better positioned to manage that impact successfully.”