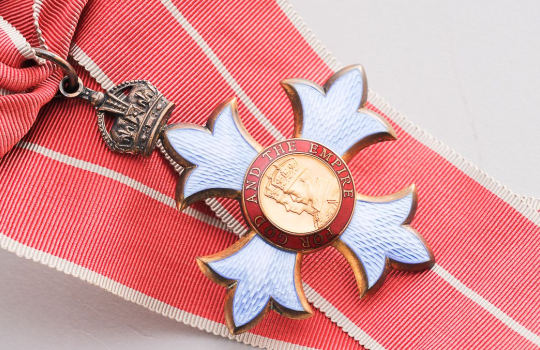 (Medal of Commander of the Order of the British Empire. Source: iCollector.com.)

While insurers are commercial entities, they nevertheless perform a vital social role, and that role is evolving just as technology evolves. Rowan Douglas’ being awarded the distinction of CBE amounts to recognition of that fact, in this case by the British sovereign. During his career, Douglas, who is Head of Willis Towers Watson’s (London) Capital Science & Policy Practice has been a strong proponent of technology-driven innovation in general and of analytics in particular. Douglas was named on the United Kingdom’s New Year Honours List for services to the economy through risk, insurance and sustainable growth. The CBE—Commander of the British Empire—is one of the U.K.’s highest honors, bestowed by the monarch, for distinguished service and innovation in any field.

Douglas was recognized for his influence in promoting the role of re/insurance-related capabilities to confront major social and economic issues. In recent years, his work has focused on the global challenge of resilience to natural catastrophe, climate risks and sustainable development through formal engagement in recent United Nations agreements and pending reforms to international financial regulation and corporate risk disclosure.

Willis Towers Watson attributes to Douglas a leading role in the analytical revolution in insurance, as founder of the risk information company WIRE, CEO of Willis Re Global Analytics, and chairman of the Willis Research Network. He has served on the British Prime Minister’s Council for Science & Technology, the Natural Environment Research Council and working groups of the Royal Society.

Douglas began his career in 1992 as a reinsurance underwriter at Syndicate 1095 in Lloyd’s. In 2014 he received the Kenneth R Black, Distinguished Service Award from the International Insurance Society, New York. “Rowan has been driving innovation through Willis Towers Watson and the global industry since he joined our firm in 2000,” comments John Haley, CEO of Willis Towers Watson. “This high recognition is richly deserved for his significant achievements over the years and we warmly congratulate him on the past and look forward to the future. This award is a powerful reminder of our values and the growing responsibility the re/insurance industry will have confronting risk and building a more resilient and sustainable future.”

Dominic Casserley, Willis Towers Watson President and Deputy CEO, adds thoughts about Douglas’ work on what he calls the growing resilience deficit. “His deep respect among business, finance and policy leaders and unwavering commitment provides him with a unique ability to shape the response to some of the greatest challenges of risk and resilience.”

For his part, Douglas insists that the honor he received reflected the collective efforts of many of his friends and colleagues from Willis Towers Watson and other organizations over the years. “As we enter 2016 it is humbling to have this work recognized by the initials CBE and thrilling to have its future empowered by the initials WTW,” he comments. “Following the global agreements of 2015, we are now facing a global resilience revolution and world leaders recognize the expertise, experience and capabilities of the re/insurance sector lies at the heart of it. I am delighted this award came as Willis Towers Watson was formed: our remarkable new company provides the complete platform to deliver on these future needs for the companies, countries and communities we serve.”