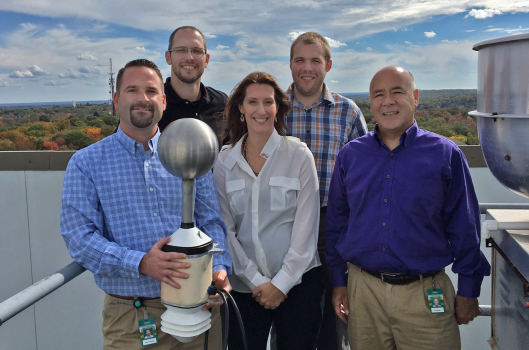 The possibilities of the Internet of Things for insurance may seem endless in theory, but somebody has to figure out discrete solutions that work in practice. Amica Insurance saw an opportunity to improve its response to hail claims with innovative technology from Understory, Inc. (Madison, Wisc.). The insurer has installed Understory’s weather sensor at its Lincoln, Rhode Island, headquarters and is testing the potential of the vendor’s detection and analytics platform to more accurately model hail events. “We’re very interested in startup companies that are coming up with new and interesting technologies that could impact the insurance industry,” comments Adam Kostecki, claims officer in Amica’s claims executive department and member of the enterprise innovation team. “Being able to work with them and test how they could impact our business is very exciting.”

Amica’s experiment with Understory attempts to add a refinement to existing methods of modeling hail events. Hail causes over $1.4 billion in property damage and nearly $300 million in crop damage in the U.S. annually, and yet the industry is challenged to more precisely model and map hail impact. The reason is that hail storm modeling is based on radar readings in the atmosphere. Understory—named for the part of a rainforest beneath its canopy—provides a new dimension to detection because it collects weather data at ground level.

A Lift in Hail Model Accuracy

“A great deal can happen between 5,000 feet and ground level, and sometimes the hail models don’t get that right,” Kostecki notes. “The thought is that there would be a lift in accuracy of models with the addition of more accurate and reliable ground-level data.” Amica has installed Understory’s RTi sensor on the roof of one of the buildings at its headquarters, creating a local weather station. The sensor consists of a metallic ball, comparable to a soccer ball in size, and a supporting metal rod fixed to a base plate. The unit, which measures temperature, wind speed and any hail impacts in real time, is powered by solar panels and has embedded wireless technology to upload directly into the Understory cloud. The vendor has already deployed networks of RTi sensors in Kansas City, Boston and Dallas, with additional deployments planned through 2017. The primary locations are in areas prone to strong winds and hail.

“A lot of what we do is tying the data from stations into actionable data that policyholders can use, such as sending a message to turn their thermostat up if there’s a drastic drop in temperature, or otherwise enabling carriers to proactively contact policyholders about weather events that might impact them,” explains Alex Kubicek, CEO, Understory. “Amica is an extremely innovative company in its own right, so we can provide them with data and they can do interesting things themselves. In other cases, we provide that kind of insight to our insurance clients.”

The objectives of the Amica experiment are, in the first place, to study its accuracy and reliability, according to Kostecki. “We’re testing whether it’s providing enough data points, reporting on enough variables,” he elaborates. “The answer to the larger question will become clear when we’re able to compare a hail event before and after the ground-level data is included and see how accurate it is. We tie our claims data back to these events, so we can analyze how well our models perform relative to policies and claims associated with a given event.”

The output of the sensor is being tested for how it can be used within Amica’s GIS system, which Kostecki describes as custom-developed internally, using ESRI’s (Redlands, Calif.) platform as a foundation.

“We have a pretty advanced GIS system that we’ve deployed around a number of claims workflows, and we’re experimenting with integrating more actionable data,” Kostecki explains. “We’re testing how getting that right data into the hands of people who need it can help us operationally.”

With more accurate data in the wake of a hail storm, Amica will be able to be more proactive in its response to its policyholders with claims, according to Kostecki. “We’ll have more control of the claim throughout the process, and we’ll have better results at the end of the day,” he says.