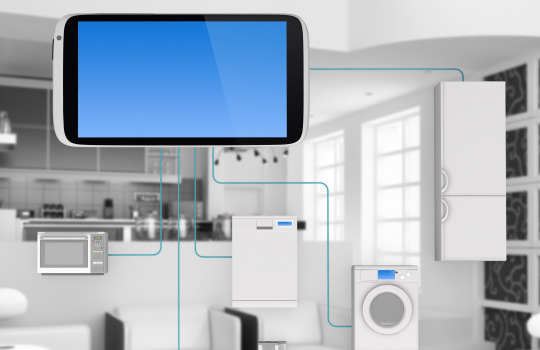 Earlier this summer, American Family announced that its Proactive Home Protection discount and a partnership with Nest to provide customers with free smart smoke and carbon monoxide alarms. It’s a small step that indicates a very large departure. The Madison, Wisc.-based carrier’s movement into Internet of Things-powered proactive protection measures is part of a larger trend that has the potential to expand the insurance business model beyond the traditional indemnity product paradigm. It implies not only more frequent interaction with customers, but also a more intimate relationship with customers based on unprecedented levels of trust. The five percent discount is available to policyholders in all 19 states that American Family does business in, and though the free Nest devices are only offered to Minnesota policyholders, those in other states can use devices of other types—including fire/smoke detectors, thermostats, water leak detectors
and anti-theft systems—produced by other manufacturers. The program is innovative in that, unlike traditional home security-type discounts, it builds data exchange between policyholder and carrier into the model. However, it represents only a stage in American Family’s exploration of the potential of the IoT to reshape the value proposition of homeowners insurance.

American Family signaled its longer-term interest in IoT-driven homeowner’s insurance products and services through a partnership with Microsoft announced in 2014. Together, the companies launched a business accelerator for startups focused on home automation. The goal of the accelerator, according to an American Family statement, is to “assist the next generation of startups to create advancements to help lead to safer and smarter homes.”

In addition to being an innovative program itself, the Proactive Home Protection discount is a way of testing American Family’s ability to partner with policyholders, according to Sarah Petit, the carrier’s director of Customer Experience.

“Traditionally, insurance companies have been very good at helping customers be prepared if something bad were to happen,” Petit says. “But part of protection is prevention, so we’re looking for ways we can partner with our customers to foster behaviors that minimize the risk of perils—and connected home devices is one way to do that.”

Petit calls the Proactive Home Protection program American Family’s largest consumer-facing test or proof-of-concept among other, smaller initiatives either planned or already afoot. “What we’re exploring is the value proposition of protection and the solid piece of mind that comes with it,” she says. “We believe there’s value in being a customer every day, not just on the off chance that you might have a claim—it’s about how we might participate in a customer’s life in a much more positive and proactive way.”

Expanding the Borders of the Insurance Industry

The relationship between insurers and their customers hasn’t changed much over time, according to Ryan Rist, American Family’s director of Innovation. Even in the emerging digital age, the insurer/consumer relationship is characterized by very limited interaction that adds little to their lives. “The fact is that insurance has been a low-engagement category: consumers interact twice a year to pay a bill, and once every ten years there’s a claim—we’re considered a necessary evil,” Rist observes. “I think that model is going to change, and we’re already seeing an expansion of the borders of insurance products and of the industry itself.”

The traditional indemnity product is only a slice of home protection, along with other measures that fit within a proactive rather than a reactive approach, according Rist. “As we say in our ads, we’re encouraging customers to dream fearlessly,” he comments.

There are multiple reasons to move in the direction of products services that focus more on prevention, Rist insists. “There’s downward pressure on our business, so it makes sense economically,” he says. “Technology enables us to do so much more than in the past, and it’s what’s driving customer wants and expectations.”

A more proactive approach to insurance utilizing IoT technologies can remedy insurers’ perennial concern of trying to develop a meaningful customer relationship when touch points are few and far between, Rist stresses. But it can also address the equally galling trend of commoditization.

“The majority of insurance advertising today reflects a race to the bottom on price,” Rist comments. “We’ve conditioned consumers to think of insurance as a commodity, but I believe we have an opportunity here to differentiate.”

The kind of data sharing required even by a single smart device discount—let alone an arrangement involving multiple devices within a connected home—implies an increased level of transparency and trust between insurer and customer, Rist acknowledges. That could be difficult to achieve in an industry that has sustained many a self-inflicted blot on its reputation. “A lack of trust can be a barrier to engagement, without question,” he says. “We’ve taken a position on being transparent, not sharing our customers’ data, which I think puts us in a good place.”

(Related:  Q&A: HSB CEO Greg Barats on the Engineering-Focused Insurer’s investment in the Internet of Things)

Technology can play an important role in fostering greater transparency, for example in the insurer/customer transaction with the greatest amount of mutual suspicion: claims. Rist cites American Family’s investment in Understory, an IoT startup that uses sensor networks to gather and analyze property damage. In one state, up to one in four hail-related roof replacements have been found to be fraudulent, he relates. “We could use sensors to more efficiently gather evidence as to whose houses were or were not damaged,” he says. “There’s a ton of opportunity to build trust while cutting fraudulent activity and delighting customers at the same time.”