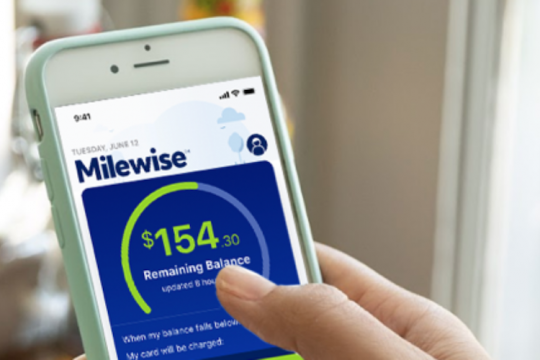 Allstate has added a new dimension to its Milewise pay-per-mile insurance policy, launched in 2018. Starting in Arizona in Sept. 2019, the insurer introduced flexible weekly pricing to the Milewise program based on driver behavior. Drivers participating in the program are given a daily rate calculated from a set figure for a six-month period, then a per-mile rate that varies week-to-week based on how safely they drive. Drivers are able to follow the trend of their driving behavior using Allstate’s Milewise mobile app. About a two-thirds of Allstate’s Milewise customers using the app have seen their premium drop—which indicates less risky driving. Allstate measures driving behavior on a rolling four-week basis, whereby the rate changes every week, referencing the previous month. To collect the behavioral data, the insurer uses an OBD II dongle to install into the vehicle’s OBD port. Arizona-based customers participating in the program can receive immediate feedback through the app after every trip.

“The device reads and transmits back to Allstate, but we use a mobile app to communicate with customers that we didn’t have historically,” comments Ginger Purgatorio, Senior Vice President, Product Management, Allstate. “The ability for the customer to observe their own behavior within our app and also to change their behavior while paying by the mile provides the ultimate in control and transparency for customers to save on their insurance costs.”

Allstate is now in its tenth year of providing telematics-powered, usage-based insurance (UBI). It’s original Drivewise product utilizes an app that provides customers with feedback on their driving, giving insights on safer driving and offering discounts or cash back, depending on the driver’s state. Through the launch of Milewise in 2016, Allstate introduced a pay-per-mile UBI program. “We launched it initially in Oregon, took some time to massage the product, then launched it more widely in 2018 and 2019,” recalls Purgatorio.

With the addition of personalized, week-to-week pricing, Purgatorio asserts that Allstate has the most sophisticated telematics product on the market. “Milewise with personalized pricing is the next step in the evolution of how telematics can be used in the insurance industry,” she says. “It revolutionizes the relationship that the company has with the customer, creating a kind of partnership in risk management.”

Purgatorio believes that telematics is a capability that will eventually be required for all insurers to be able to identify and segment risks more granularly, and to assure customers that what they’re paying is fair. “Traditionally there’s been a bit of a veil between customers and how their price is developed,” she says. “This opens up a new world of transparency and provides added trust and value to our relationship.”

When Allstate first pursued the creation of a pay-per-mile offering, the company had in mind urban commuters who mostly traveled on public transportation.

“However, we found that there’s a broad demographic of people interested in the product well beyond the customer segment we originally identified,” says Purgatorio. “We see interest from retirees, work-from-home professionals, and young drivers who are cost-conscious and need to pay attention to how they’re driving. It’s been a very eye-opening experience in this iteration of Milewise, and I think customers are very accepting of this different way of consuming their insurance.”

How Technology is Transforming Relationships within the Transportation Ecosystem