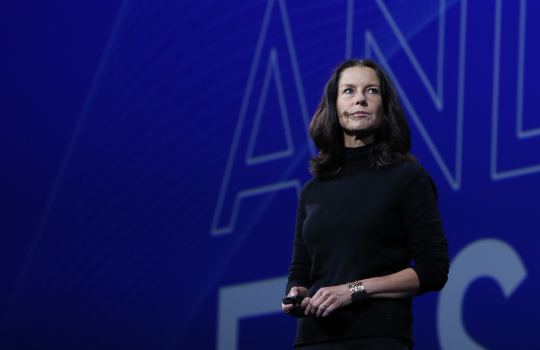 Allianz Health Insurance Germany (Munich) announced yesterday that it has selected Pegasystems Inc. (Cambridge, Mass.) to build more comprehensive digital services to its customers. The insurer is using the vendor’s Pega 7 rules-based technology as a middle layer in its IT systems. The integration will facilitate seamless data flow between agile customer applications and legacy core systems, enabling faster and continuous transaction processing and greater automation of processes. Birgit König, CEO of Allianz Health Insurance, delivered a keynote address, characterizing the engagement as a balance between the traditional stability and reliability of the company and the speed and agility that customers increasingly expect.

König introduced her theme as a contrast between, heritage and renewal, between the honored values of the past and the exigencies of a rapidly changing world. “As an insurance company we need to be stable and reliable more than anything else—especially in our IT systems; as a customer focused company though, with a large retail business, we also need to be agile and fast,” she said. “We compete with companies that were born digital and that have no legacy systems.”

The questions König said she would attempt to answer through the presentation were how Allianz turned the ‘either-or’ of stability and reliability versus agility and speed to a ‘both-and,’ and how Pegasystems helped the insurer accomplish that.

A 125-year-old company, Allianz today manages $1.5 trillion in assets and insures 85 million policyholders cross 70 countries globally, König reported. The company was stronger than ever, she asserted, not least because of a focus on technical excellence. Allianz was the first European company to adopt a mainframe computer, installing the IBM 650 in 1956.

König noted that Allianz’s oldest customers are over 110 years old, and over the course the 75 years during which they’ve been insured, the company has evolved from purely paper-based operations to punch card machines and modern computers. However, she stressed, customers don’t care about innovation in back-end systems. “All they demand is stability and reliability in our operations, no matter what,” she commented. The problem today is that stability and reliability come at the price of slow implementation, she noted. “With our history there’s another issue though: not all our systems are built for fast adaptation,” König continued. “Some of them may be rather monolithic; some of them may be programmed in languages that are not very common among young software engineers anymore.”

A New Kind of Customer

Slow adaptation will no longer suffice in a world with a new kind of customer who was born and raised on digital one-click shopping and overnight delivery, König suggested. “These customers expect things to be done instantly on phone and in self -service,” she said. “You know that customer and you know that they are not very patient or accommodating anymore.”

As a benchmark of quality service, König  noted that Allianz has achieved overnight, straight-through processing for 50 percent of claims. “In our hugely complicated reimbursement system in Germany that’s a huge breakthrough—it’s actually truly unique,” she said. “But for our customer, that’s still not enough.”

“If you can get a book delivered to your doorstep over night, then why not get a claim confirmed in realtime—hey, there isn’t even a logistics chain involved,” König continued. “Well, we have to accept that it’s not us who shape customer expectations anymore—it’s other industries. No one can ignore these dynamics and expect to be successful in the market.”

If incumbents don’t react to the standards set by other industries, they risk being disrupted from below, König insisted. Allianz has reacted by emphasizing the virtues of both stability and reliability, on the one hand, and speed and agility on the other, she said.

“That’s why while one part of us does everything to maintain stability ad reliability in our back end systems, the other part is equally busy changing things all the time,” König elaborated. “One part plans, tests, and executes in release cycles of several months; the other part builds applications in a garage-type atmosphere where user comments are translated into features on the spot. And where those features are put into production right away.”

“That kind of speed you can only get within…an approach that quickly cycles through testing, failing learning and adapting—fail fast is the name of the game,” she added.

That approach doesn’t work for back-end systems, and so the solution is to create a seamless, end-to-end process between the front- and back-end systems where the front end has all the flexibility and the back end provides us with the stability to manage contracts over 75 years without a single mistake.”

The way to reconcile the apparently antagonistic ideals of the front end is a “two-speed architecture,” König said. “That’s where Pega comes into play: Pega’s suite of tools enable us to be agile and fast on front end and stable and reliable on the back end.”

Allianz uses the Pega suite as an efficient and dynamic interface between the back end systems and front end applications, but it has unique features in itself. For example, in Allianz claims processing Pega contributes a deterministic rules engine that combines with the insurer’s stochastic analysis module to answer all questions in claims management. “It’s our system of artificial intelligence in claims,” König said.

Pega allows Allianz to keep its back-end systems intact with all its data in one place while at the same time employing self-learning rules engines, König continued. And it can be operated by people who know everything about claims and next to nothing about coding, König related.

“In a nutshell, we use Pega because on our front end we cannot wait for long release cycles, cannot risk an expermintal approach,” she commented. “Pega allows us to blend the benefits of stability and agility in our systems; Pega gives us the freedom to move from ‘either-or’ to ‘both-and.’”

That blend has implications on the way Allianz works, for example, it no longer uses the waterfall approach to software development. “We’re agile now,” König said. “Well, at least in most cases.”

That Agility has also rubbed off on Allianz health’s largest IT project ever—the complete migration from all legacy systems to a modern platform. “This platform will allow us to manage contracts, not just over 75 years but also across 70 countries,” she said. “What this project means for us, bearing our history in mind, both in terms of efficiency gain but also in terms of challenges in the migration—it’s daunting.”

Promoting agile development in a project of that magnitude is no easy task, König learned. Too many people were involved and too much was at stake. With all those challenges ahead, the appetite for change was not very pronounced in the beginning, but then budget estimates made the status quo unacceptable, König related. “Something had to change so we dug real dee3p, we challenged all assumptions and out came the ugly truth: we just needed a step change in productivity increase.”

At that point Allianz’s project leaders decided to extend Pega’s agile approach to nearly everyone in the gigantic project. “In a matter of a few weeks we co-located all our IT architects, software engineers, user interface designers, content experts and of course our friends from Pegasystems to one common office space in Munich,” she says. “It was a gigantic nightmare.”

The payoff was tremendous however. The insurer achieved a huge improvement in efficiencies and effectiveness just through co-location. “In a matter of a few weeks we improved both the speed and quality of our work,” König said. “To give you one single number, we actually tripled the number of demands we could put into one release, and we did so with even fewer defects than before.”

“We believe we’re onto something great here, and we know this is just the beginning,” König concluded.