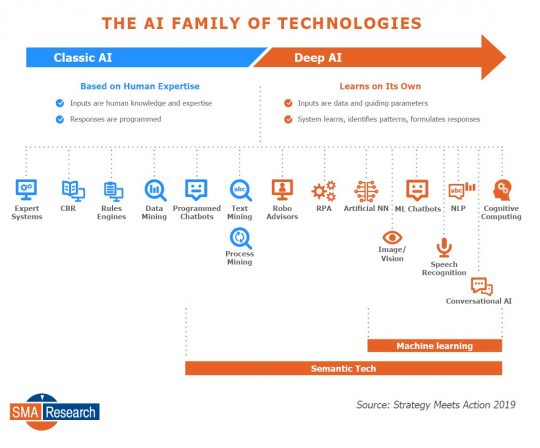 Of all the recent buzzwords peppering discussions of insurance technology, artificial intelligence—or AI—is probably the most common and the most classic in terms of the latitude used. Like cloud, anything closely resembling or touching artificial intelligence gets the term. However, the technology is real and consequential, and insurers are alert and ready to use it. The challenges will be sorting out what are the most useful types of AI and what are likely to be the most successful business use cases. Those challenges are addressed in “AI Technologies in P&C: Insurer Progress, Plans, And Potential,” a new survey-based research report by SMA (Boston).

AI is already a common feature of the world as we experience it as consumers, whether we realize it or not, and these technologies are highly relevant to insurance, according to the report. “The insurance industry is a prime candidate for the application of these technologies, due to the availability of massive amounts of both structured and unstructured data, the complexity of insurance products and processes, and the ascendant need to gain deeper insights into customers and risks,” the reports introduction notes.

SMA finds that the insurance industry is making good progress with AI, though it is clearly in the earlier stages of adoption. Insurers tend to be focused on more proven types of AI, such as robotic process automation (RPA) for efficiency advantages, chatbots to provide new customer interaction options, and early forays into machine learning to gain new insights on risks. As it moves to embed more AI into the insurance value chain, the industry is also wary of its potential downside, not least in the potential of significant job loss or the introduction of unforeseen risks.

Today, while technologists may understand the nuances of types of AI, business leaders are far less likely to understand its value for various areas of the business, according to Mark Breading, Partner at SMA and co-author of the study. “We’re still in an educational stage in the industry,” he says. Breading supplies the example of natural language processing (NLP), which ranked fairly low among commercial lines respondents to SMA’s survey, with only 20 percent seeing value, as compared to 43 percent of personal lines respondents. “We think there’s actually huge potential because there’s so much unstructured, complex data flowing from submission into underwriting and then to claims as well in commercial lines,” Breading says. “We think it’s very important technology for commercial lines with the potential for many interesting and effective solutions.”

The SMA study’s first major observation is that a great deal of activity occurring on a spectrum of “Deep AI” with built-in learning capability, including robo advisors, RPA, machine learning (ML) chatbots, NLP, cognitive computing and conversational AI. Insurers currently tend to be cautious with the more sophisticated technologies because of potential regulatory and related difficulties. “If you have an ML algorithm that spits out a recommendation, such as an underwriting score, you want to avoid a ‘black box’ situation and be able to provide a rationale for the result,” Breading cautions.

Despite challenges associated with more sophisticated types of AI, insurers are significantly involved in experimentation with ML and see its potential. The insurance industry is far more advanced in its use of RPA and chatbots, but these have their own challenges. “The concern is that insurers may be automating without thinking,” Breading says.  “We may be repaving the cow path or ending up in a situation where the initiatives are poorly justified and documented, leaving companies saying, ‘We don’t even know how this works because we automated it.’”

SMA’s second major finding is that the set of AI technologies identified have a practically unlimited range of use cases over the longer term. “It’s very different than a newer technology such as drones, which are very useful but have a defined application,” Breading says. “However, whether we’re talking about chatbots, RPA, ML, NLP, or data mining of unstructured data, you can literally take any segment of the industry and apply these technologies for value.” Since the potential application of AI is so broad, insurers need to be intelligent and focused in their exploration of the technology, Breading advises. “It’s the measure of potential for industry that there is extraordinarily broad application of these techs across the insurance value chain and all lines of business,” he comments.

SMA’s report identifies multiple areas where AI technologies are being used for customer interactions and operations, and notes that the potential these areas remains far greater. Breading calls out the area of risk management as an area with staggering potential for the use of AI.

“We could discuss other areas—claims for example—but we’re really focused on risk because it’s the heart of the insurance business and we have just scratched the surface of capitalizing on these technologies,” Breading comments. “It will define the future of underwriting, and not only that but the future of underwriters themselves.”

CES 2019: Data, AI, Voice Technology among Most Important for Insurers 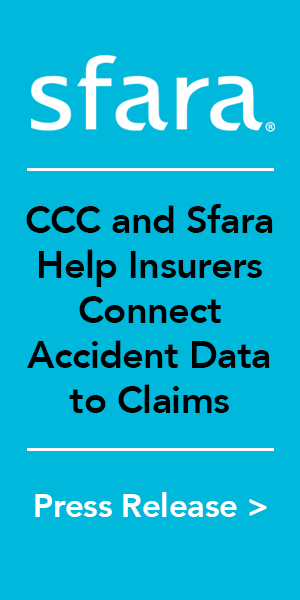