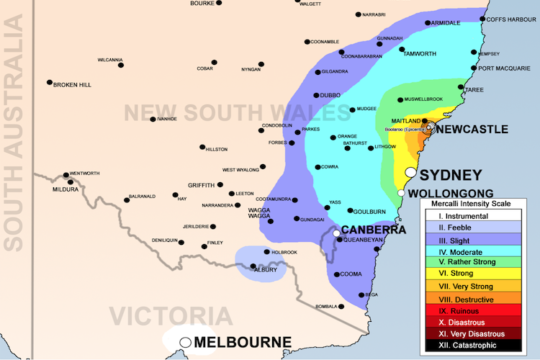 (Intensity map of the 1989 Newcastle Earthquake of New South Wales created by Robert Myers based on Geoscience Australia data.)

Catastrophe risk modeling firm AIR Worldwide (Boston, a company of Jersey City, N.J.-based Verisk) has released an updated version of its Earthquake Model for Australia. The updates were prompted by findings in the National Seismic Hazard Model from Geoscience Australia (GA), which challenged established conceptions of Australia’s seismic hazard and generally decreased the view of seismic hazard significantly. AIR’s updated fully stochastic, event-based earthquake model serves to capture the effects of earthquake-induced ground shaking and liquefaction on risks located in continental Australia and the island of Tasmania.

“This model has been developed to meet the wide spectrum of earthquake risk management needs of the insurance industry and we took a careful and thoughtful approach in order to deliver this update,” comments Dr. Jayanta Guin, EVP and chief research officer, AIR Worldwide. 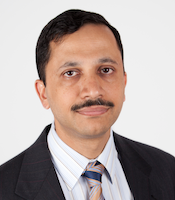 AIR reports that the model has incorporated the changes from the updated National Seismic Hazard Model, but this new release of the model also includes many other significant enhancements. “Since Australia is characterized by low seismic hazard and high levels of uncertainty in our understanding of risk, having a robust historical catalog is critical for this model,” AIR’s statement on the updated model says. “AIR has independently developed a historical catalog that incorporates GA’s 2018 historical catalog as well as additional events from global sources, which has expanded the length of the catalog to the end of 2018. To accomplish this, AIR scientists developed a method to convert Australia’s local magnitude (ML) to the more widely used moment magnitude (Mw) scale to create a catalog that has been homogenized to a consistent Mw scale.”

The model’s fault database has been updated based on GA’s updated 2018 fault model and expanded to 391 faults, including a recent fault discovered as a result of the 2018 Lake Muir Earthquake. The model includes the latest ground motion prediction equations (GMPEs) to better capture the epistemic uncertainty inherent in estimating ground motions in tectonically stable regions, according to AIR. Updated Site Soil Classification Maps offer higher resolution amplification modeling along the coastal areas where the majority of the population resides, the company says. The vulnerability framework now uses intensity-based damage functions and has been expanded to include explicit support for new risk types including marine hull, marine cargo, and builder’s risk.

“The updated model’s revised view of the seismic hazard and updated vulnerability functions provide a better match to historical losses. These updates allow for AIR to continue to provide a comprehensive and scientifically credible earthquake model for Australia,” notes Guin.

As a supplement to this model, AIR says it is releasing nine Extreme Disaster Scenarios (EDS). EDS’ are meant to provide clients with additional scenarios in light of the uncertainty, to assist in stress testing and assessing the impact of large loss events. While they represent low probability—and in some cases very low probability—scenarios, they are nevertheless scientifically plausible, an AIR statement notes.

The AIR Earthquake Model for Australia is available in the 2020 releases of Touchstone and Touchstone Re catastrophe risk management systems.