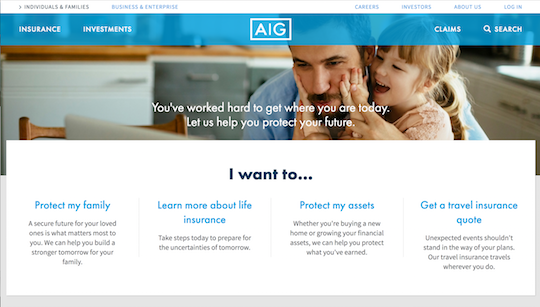 “Brian is uniquely qualified to lead AIG at this important time,” comments Douglas M. Steenland, Chairman of the Board, AIG. “Brian has spent his entire career in insurance. He worked for AIG for 21 years at the start of his career, so he knows this company well. He was the CEO of ACE, one of our main competitors. He ran Marsh & McLennan Companies, one of AIG’s largest broker partners. At Hamilton, he introduced cutting edge data science and analytics into the insurance business. He is a hands-on leader who has consistently delivered strong bottom-line results. He has demonstrated a passion for deploying new and innovative ways to serve clients. All of this will enable Brian to help AIG achieve its full potential to be the leading insurance company.”

Douglas M. Steenland, Chairman of the Board, AIG.

“The Board and I want to thank Peter Hancock for his leadership in positioning AIG for the future,” Steenland adds. “During his tenure, Peter set the course for the company to deliver higher quality, more sustainable earnings and dramatically reduced reserve risk. We are grateful for his leadership over the past seven years.”

“It is a privilege to return and lead AIG,” comments Duperreault. “I look forward to building on AIG’s nearly 100-year heritage as one of the world’s leading insurers for its next century.”

Becoming the Most Technology-Enabled and Capital-Efficient Carrier

“In my discussions with the Board and management team, I have been impressed with the progress made,” Duperreault adds. “I look forward to working with AIG’s global team to build on this momentum to grow the business, and continue delivering innovative solutions and extraordinary service to clients. I also welcome the opportunity to continue AIG’s work with Hamilton and Two Sigma to become the most technology-enabled and capital-efficient carrier in the industry.”

AIG reports that Duperreault’s compensation arrangements are described in the company’s Current Report on Form 8-K filed with the SEC on May 15, 2017. Pursuant to New York Stock Exchange Rules, AIG notes that these arrangements include a grant, made upon Duperreault’s commencement of service with AIG, of stock options to purchase 500,000 shares of AIG common stock, which vest subject to AIG’s stock price exceeding certain price targets and which will be made outside of AIG’s equity incentive plans as an “employment inducement grant” under NYSE Listing Rule 303A.08.

Duperreault previously served as Chairman and CEO of Hamilton Insurance Group, a Bermuda-based holding company, with property and casualty insurance and reinsurance operations in Bermuda, the U.S. and the UK. Prior to that role, Duperreault was President and CEO of Marsh & McLennan Companies, from 2008 to 2012. Before joining Marsh, he served for two years as non-executive Chairman of ACE Limited, an insurance and reinsurance company, and CEO of ACE Limited from October 1994 through May 2004. Prior to joining ACE, Duperreault served in various senior executive positions with AIG and its affiliates from 1973 to 1994.

Duperreault is Chairman of Attune, a data-enabled company established by Hamilton Insurance Group, AIG and Two Sigma, and Chairman of the Board of Directors of Blue Marble Microinsurance. He is the former Chairman of the Board of Overseers of the School of Risk Management of St. John’s University, New York. Mr. Duperreault is a member of the Boards of the International Insurance Society, the Insurance Information Institute and the Bermuda Institute of Ocean Studies (BIOS), and is a former Member of the Association of The Metropolitan Opera, New York. He serves on Johnson Controls’ Board of Directors.