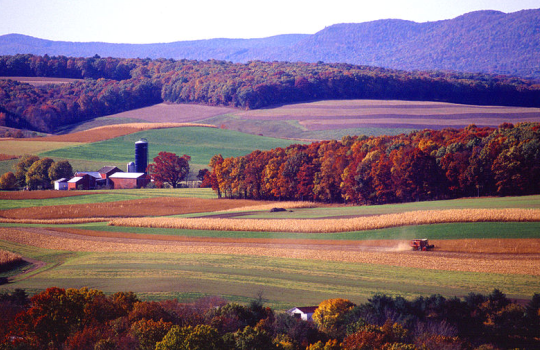 (AAIS is recognized for its role in the design of insurance products for agricultural risks. Photo credit: Arnold Reinhold.)

The American Association of Insurance Services (AAIS, Lisle, Ill.) a national P&C advisory organization that provides policy forms, rating information and automation support, has announced that it will introduce several enhancements to its program for insuring farms. The enhancements come in a series of mandatory and optional endorsements being filed in most states as components of the Farmowners Program maintained by the AAIS. The filings have a proposed effective date of Oct. 1, 2015. Due to regulatory conditions in the various states, not all endorsements are filed in each state.

Among the enhancements planned are optional exclusions of liability coverage for bodily injury or property damage arising from asbestos this is a mandatory endorsement, described canines, and the production, distribution, or consumption of raw milk, an AAIS statement reports.

Also included are optional first-party property endorsements addressing wind and hail damage. One of those property endorsements allows insurers to exclude coverage for purely “cosmetic” wind and hail damage to roofs, siding, and/or doors and windows. The other property coverage option allows insurers to amend the valuation provision to actual cash value (in place of replacement cost) for damage to roof surfaces caused by wind and/or hail, according to AAIS.

The property coverage options were first introduced in the AAIS Homeowners Program, and respond to requests by some insurers in windstorm-prone regions for options other than rate increases to address a growing volume of wind and hail claims, the AAIS statement says. Similarly, the latest AAIS Farmowners enhancements include mandatory endorsements introduced in the AAIS Homeowners Program in 2014. These amendatory provisions clarify the intent of policy language with respect to property coverage for earth movement and collapse, and liability coverage with respect to intentional acts and “electronic aggression.”

Earth movement exclusions recently filed specify that the exclusions apply whether the earth movement results from a natural cause, a manmade cause, or some combination thereof, AAIS specifies. Incidental coverage for collapse is revised to specify that collapse means an abrupt caving in, falling in, or giving way of a part of a building, according to the company’s statement.

The “electronic aggression” exclusion excludes coverage for bodily injury, property damage, and personal injury arising out of any means of electronic exclusion, AAIS reports. This language was introduced in AAIS personal lines forms in response to reports that online harassment was contributing to suicide attempts by some victims of “cyber-bullying.”