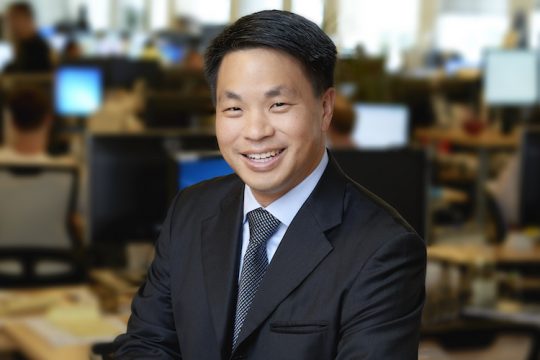 Guidewire Software’s (San Mateo, Calif.) appointment of Mike Rosenbaum as CEO in Aug. 2019 was interesting as an executive appointment to an important firm and because it brought a product-focused senior Salesforce executive into the realm of insurance core systems. However, it was also a major story because it meant that Marcus Ryu, the company’s dynamic, customer-obsessed leader was stepping down—or at least over to his new role as chairman of the board. Ryu is one of six founders of Guidewire, a group of Silicon Valley entrepreneurs entering the insurance industry and eventually making a huge impact. Ryu served in several important capacities since Guidewire’s founding in 2001, including leading the firm’s strategy, delivery and professional services functions. Ryu was always a prominent presence at the firm as it became, first, a successful claims system vendor, and later a leading competitor in core insurance systems. Becoming CEO in September 2010, Ryu led the company through its march to preeminence, measured in terms of analyst ratings and press recognition as well as business metrics. He presided over the company’s IPO in 2012. Since Ryu took the reins, Guidewire has gone from 101 to 380 customers, from 10 offices to 25. The firm has expanded its solution partners from four to 52, and its consulting partners from 10 to 29. The company had seven international offices when Ryu became CEO and gained 10 more under his leadership. Guidewire’s revenues for fiscal year 2011 were $172 million; in FY2019, they were $719 million.

Insurance Innovation Reporter: How does it feel to have retired as Guidewire’s CEO?

Marcus Ryu, Chairman of the Board, Guidewire: Well, it’s still a bit unreal.  I had always assumed I would die in the saddle, and many have heard me say that this was my life’s work. It still is, though the work of chairman is maybe 3 percent of that of CEO! However, I will remain active and I expect to serve as chairman for the duration.

IIR: Naturally, industry observers are curious as to the reasons you left the CEO position.

MR: I would be dishonest to say there wasn’t a personal dimension. Nearly two decades is a long time to long time to serve in the leadership of a company; and adding eight years in the CEO role implies some personal sacrifice. Today I think the company is best served by someone with a different set of skills: more pure product focus and cloud experience at large scale. What’s essential for us to get right is this fundamental strategic transition, which required identifying the absolutely right successor, the right profile and shared values at a deep level. At over four months in, it really does feel right. It’s a source of pride to me that I was able to preside over a smooth transition and it is a privilege to serve the company in another role now. IIR: Could you talk more about how the hand-off to Mike Rosenbaum has gone?

MR: Mike’s a superstar, incredibly accomplished in his own right for what he did at Salesforce. Indeed, at Salesforce he arguably had a substantially larger purview than at Guidewire, though not all the same functions—manager, technologist, product expert. He didn’t have deep knowledge of the insurance industry, but what made the transition easy was cultural continuity. On day-one, he was one of us. He is very fluent with our values of integrity, rationality and collegiality. He’s very natural and organic in his behavior and communications. Customers felt very comforted that Guidewire chose a CEO who shares our values. He is learning about the insurance industry at rapid clip. But his job isn’t to run an insurance operation; it’s to build high-performing software for insurance, and he comes to that task with highly relevant and impressive expertise.

IIR: Could you elaborate on why he’s the right person for the Guidewire CEO job today?

MR: He’s great at motivating product development. He knows what excellence looks like. His corpus of experience is very relevant. He perfected building reliable business services during about 13 years at Salesforce on a very large scale, and that’s a perfect exemplar of what we’re trying to do.

MR: That’s right. None of us had come from insurance. Some had served as management consultants, but that was a shallow acquaintance with the insurance industry. Immodestly speaking, we had the quality of listening well and we committed ourselves—as Mike is doing today—to being students. Insurers were going to educate us. Build great software and apply it to that specific domain. We’ve always had to marry these different domains. It’s difficult to find that kind of combined domain experience in an individual, but we’ve done it at the company level, and that’s the formula for the future as well.

IIR: Let’s review the roles you held prior to becoming CEO.

MR: While I didn’t start as CEO, I was part of the cofounding team of six. I was originally head of strategy, which came to encompass delivery as well. I was the first head of professional services, and implicit in that was  developing and managing key customer relationships. Product and Marketing reported to me in the pre-CEO days. The privilege of my journey has been to serve in multiple different roles that educated me in the core functions of the company. It was important to have a view of what it’s like to deal with customers, as opposed to being a theorist in an ivory tower.

IIR: One of the things that distinguished you as a CEO was your close involvement with clients—as customer advocate, CEO-salesman, corporate ambassador—and it seems to me that may have deepened even as Guidewire became more global in its reach. What drove that approach?

MR: The nature of our business is to ask very large and venerable organizations to make massive strategic commitments, so principal-to-principal communication is often required. I wanted to communicate to our customers that that I was personally accountable. Sometimes that communication was more symbolic, sometimes more practical. Of course, that also contributed to the stress and rigor of the job—doing things around the clock. When the company grows to a certain size, it’s not great for the CEO to be on the road all the time. But my instinct was to always get on the next plane, making sure that the engine was working properly from the customer’s perspective.

IIR: How is life different following the transition to the chairman role?

MR: I have more time for reflection. What I missed in the CEO role was deep reading—not just scanning the news, but reading serious, thoughtful works from beginning to end. I’m doing a lot more of that now. I’m working my way through a list of 100 books. I have a lot more time with my nine-year-old daughter. I’ve been able to tune into parts of the world I had to block out. I don’t have plans or a time frame but, I harbor the aspiration to start another company. I’m in an educational mode. A new company would be different than Guidewire, but hopefully I’d be able to leverage many of the learnings of these last 20 years. IIR: Tell us how your current role as chairman fits in with Guidewire’s current strategy.

M: First, the company needs to be well governed, to have the right board. We’ve had some evolution. One objective was to increase insurance expertise on the board. For example, Mike Keller, former CEO of Nationwide, and Margie Dillon, former Chief Customer Officer of Liberty Mutual.

In the chairman capacity I’m still accessible to customers. They feel I have open promises, and my being responsible to fulfill that continuity is helpful. Those are very comfortable relationships and don’t involve clashing with the CEO.

IIR:  We’re reaching the end of the first two decades of the 21st century—a period that parallels Guidewire’s story. As you look back over these nearly 20 years, what would you observe about the technology-driven changes in the insurance industry?

M: I’ve grown into a love of the insurance industry. At the start I under-appreciated how fundamental and indispensable to society it is. Today the risks we face are greater and more complex than ever—and we’re all under-insured! As a species, we are way uninsured. Insurance is indispensable when the inevitable happens—tragedy, large economic loss. Insurance enables individuals, companies, society to recover. The industry is under great stress today, with systems that no longer support the kind of experience and products needed. We’re part of solving that problem, modernizing the industry. We’re part of modernizing it. Of course it’s a changing world and there are risks outside our purview. In a nutshell, the future may not be like the past—which is a core assumption of insurance. It’s a time of great dynamism and therefore stress for us. It’s much more dynamic than it was 20 years ago. Then it wasn’t unusual for people to say that the industry had basically been doing the same thing for the last three decades. Nobody would say that today. The policyholder looks utterly different than in 2001. The industry has never been more important, and therefore Guidewire is more important than ever.