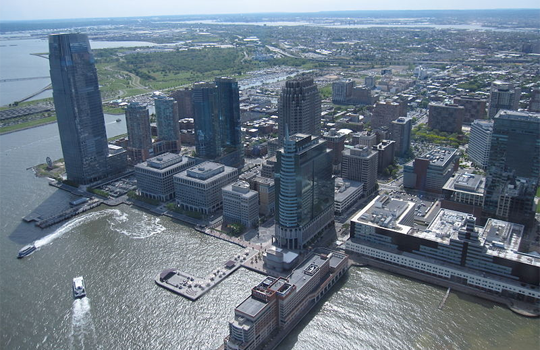 (Aerial view of Jersey City, N.J., which along with New York and Newark, falls within an area where 68 percent of homeowners at risk of flood or surge inundation are not required to carry flood insurance. Photo credit: Gryffindor.)

Property data services provider CoreLogic’s 2014 storm surge analysis, released today, found that more than 6.5 million homes along the U.S. Atlantic and Gulf coasts are at risk of storm surge inundation, representing nearly $1.5 trillion in total potential reconstruction costs – and that more than $986 billion of that risk is concentrated within 15 major metro areas. The vendor warns that this exposure could constitute significant risk for homeowners and financial services companies, as many at-risk homes lack insurance protection.

Storm surge data is highly useful to insurers and financial service companies as it enhances the understanding of potential exposure to water damage for homes, including those that do not fall within designated FEMA flood zones, according to a CoreLogic statement. More granular insight into storm surge impact enables greater preparation and mitigation efforts that can help reduce loss and improve safety and disaster response, as well as enabling more precise flood insurance underwriting.

More precise understanding of which of the properties exposed to storm surge risk are and are not within designated FEMA floodplains also presents an opportunity for insurers to counsel customers and prospects about their risks. The information gives insurers the potential benefit of a sale or upsell, as well as avoiding the threat of negative customer experience in the event of a serious storm surge-related financial loss that is not covered by the insured’s policy. In addition to the customer satisfaction issues of particular companies, the property/casualty industry could potentially avoid negative publicity such as that following Hurricane Sandy, when insurers were widely accused of seeking to avoid paying legitimate claims.

This year’s CoreLogic storm surge analysis analysis examined homes along the coastlines of 19 states and the District of Columbia in the Gulf and Atlantic regions, extending from Texas to Maine. Florida ranks number one for the highest number of homes at risk of storm surge damage, with nearly 2.5 million homes at various risk levels and $490 billion in total potential exposure to damage. At the local level, the New York metropolitan area, which encompasses northern New Jersey and Long Island, contains not only the highest number of homes at risk for potential storm surge damage (687,412), but also the highest total reconstruction value of homes exposed, at more than $251 billion.

To improve accuracy, this year’s analysis included additional categories of single family residential structures, including mobile homes, duplexes, manufactured homes and cabins, according to CoreLogic. Those categories, along with new construction, boosted the total number of homes identified within potential surge areas. The values represent estimates of highest possible reconstruction costs, taking into account labor and materials, and based on total destruction of the residential structure. CoreLogic notes that a given storm affecting the identified areas can result in less than 100 percent damage.

The lower-than-average Atlantic Hurricane activity that prevailed in 2013 – during which no storms made landfall on the U.S. Coast – and is predicted for this year also should not result in complacence, counsels Dr. Thomas Jeffery, senior hazard scientist, CoreLogic Spatial Solutions. “This year’s season is projected to be slightly below normal in hurricane activity, but the early arrival of Hurricane Arthur on July 3 is an important reminder that even a low-category hurricane or strong tropical storm can create powerful riptides, modest flooding and cause significant destruction of property,” he says.

CoreLogic’s 2014 analysis shows that total exposure varies significantly from state to state, given differences in population, trends in residential construction, geographic risk factors, length of coastline and other local characteristics. For example, Florida and Texas are within the top five states for number of properties at risk primarily because of their extensive coastlines. By contrast, Louisiana and New Jersey have a smaller coastal area, but lower elevation makes them more vulnerable to storm surge – resulting in their ranking within the top five states by reconstruction value of properties at risk.

The vendor describes its analysis as complementing FEMA flood zone information to provide a snapshot of potential damage exposure at the property level, as many properties located outside designated FEMA flood zones are still at risk for storm surge damage. The standard FEMA flood zones are designed to identify areas at risk for both freshwater flooding as well as storm surge, based on the likelihood of either a 100-year or 500-year flood event. They do not differentiate risk based on storm severity, and as a result, according to CoreLogic, do not effectively define the total extent of the risk possible along coastal areas. CoreLogic’s analysis lists compares homes that are not located within FEMA 100-year floodplains against the number of homes located in surge inundation zones, as well as those that are located I both surge and FEMA Special Flood Hazard Areas (SFHA).

“Homeowners who live outside the FEMA flood zones typically do not carry flood insurance, given that there is no mandate to do so, and therefore may not be aware of the potential risk storm surge poses to their properties,” according to a CoreLogic statement. “Among select major metro areas, Virginia Beach-Norfolk-Newport News, Virginia/North Carolina has the highest percentage of homes (86 percent) at risk of storm surge but not designated in a FEMA flood Zone.”

Other non-FEMA flood zone areas at high risk of storm surge flooding include Philadelphia-Camden-Wilmington and Jacksonvill, Fla., at 85 and 76 percent of homes at risk respectively, according to CoreLogic. Within New York-Newark-Jersey City area, 68 percent of homeowners at risk of flood or surge inundation are not required to carry flood insurance because they are not located within a designated FEMA 100-year floodplain.

Other findings of CoreLogic’s storm surge analysis include the following: