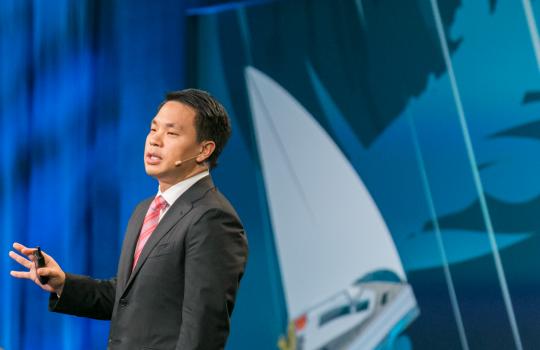 There has been more change of consequence to the insurance industry in the last several years than the last several decades, and that change could be grouped into five categories, said Marcus Ryu, CEO of Guidewire Software in his keynote speech on Nov. 2 at Guidewire Connections 2015, the property/casualty insurance systems vendor’s user group meeting and industry conference, in San Francisco.

Insurers face an inexorable rise in digital expectations, as exemplified by the fact that from half to two-thirds of adults in the developed world already use a smart phone and the number is rising, Ryu noted. “Last month I saw a man set off a metal detector at the airport and say, ‘What!’ to the TSA guard, while holding an iPhone—it had become part of his body,” Ryu related. “I thought it was hilarious, then I did the same thing myself.”

The incident illustrates a defining fact of modern life, Ryu suggested: everyone walks around with a supercomputer in their pocket. Computation is reshaping education as well, with about 20 million students now using a $200 Chromebook, which provides adaptive content rather than paper textbooks that are static and actually more expensive. In daily life, he added, “we take for granted services from Amazon, Uber and AirBnB that did not exist 10 years ago.”

(Related: On Insurers’ Slow, Sure Progress to Digital: Q&A with Novarica’s Matt Josefowicz)

However, the insurance industry isn’t on the same level as much of the rest of the culture when it comes to digital, Ryu submitted. He cited a BCG and Morgan Stanley study that placed insurance 14th out of 16 industries in providing a consumer-grade digital experience. “We should draw no comfort from the reliably unpopular performance of landlords and cable companies,” Ryu quipped. “Instead we should be reading the writing on the wall: the competitive battleground for sales and service will be digital.”

The largest P&C risk segment—personal auto—is suffering an inexorable decline, which cannot fail to have profound implications for the industry, according to Ryu. Among the factors causing the decline is that people are driving less: 16 to 34 year olds are driving 23 percent fewer miles, and the proportion of high school seniors with driver’s licenses has dropped from 85 percent to 70 percent since 1996, Ryu reported.

Various safety related innovations are reducing risk also—ranging from a variety of collision-avoidance and driver-assistance technologies all the way to driverless cars—as is the transportation-as-a-service phenomenon exemplified in Ryu’s comment by the emergence of rideshare companies Uber and Lyft.

“In response to these trends, your companies have been diversifying aggressively into other lines of business and rethinking how auto insurance should be distributed and serviced,” Ryu said. “Not just internet-based sales, but fundamentally new products and digital customer engagement models.”

Insurers also face competition from a host of non-traditional market entrants, according to Ryu. He cited aggregators such as Compare.com, white-labeling retailers such as Costco, Wal-Mart, Overstock and others, and Google.

(Related: Google’s Distribution Disruption: Insurers Must Be Where the Customers Are)

“These players start with the premise that they are the logical owner of the customer relationship because of their brand strength or because they are present at the point of search and sale,” Ryu said.

Ryu also cited greenfield carrier entrants such as Metromile, who seek to redefine auto insurance as a metered service. “A similar principle is taken a step further by a UK start-up called Cuvva,” he said. “They let you take a picture of a license plate to buy coverage on an hourly basis—super flexible, nearly instantaneous.”

The industry is also being rocked by the emergence of relevant new technologies, many of which fall within the category of the Internet of Things, Ryu cautiouned. As a result of the cost of sensing technologies dropping, within five years there will be 100 trillion sensors—or about 14,000 for every person on the planet—capturing and streaming data, he asserted. “In principle, being able to attach a device to a risk and capture data from it continuously should affect every aspect of the insurance lifecycle from product definition, to pricing and underwriting, policyholder service, and claims,” Ryu said.

Drones will also have a significant effect on the industry, according to Ryu. He noted that five years ago the FAA estimated that by 2020 there would be 15,000 of them in operation—and yet today more than that number are now sold every month. “They are being used to track storms, apply fertilizer and pesticides to crops, monitor endangered wildlife, even perform search-and-rescue missions in remote areas,” he said. “I would not doubt Jeff Bezos’s intention to have them deliver packages to our doorsteps within 5 years.

Most relevantly for insurance, drones can capture vast amounts of data at far greater speed and at radically lower cost than human beings for many applications, Ryu stressed. Thus, any insurance scenario that requires surveying of physical location could potentially use drones with current technology.  “Consequently, carriers such as American Family, State Farm, AIG, and USAA are already very active,” Ryu said.

The fifth trend Ryu said insurers should be alert to is the emergence of new categories of risk needing intermediation.  “The most discussed opportunity is in cyber insurance, which is still in the low single digits billions of premium globally with only 14 percent of U.S. companies having any sort of coverage,” Ryu observed. “Intuitively we know is only a fraction of the actual risk implicit in having our personal and commercial lives stored in digital form.”

Supply chain disruption is another emerging risk category, rated as more significant than natural catastrophes, explosion and regulation by risk managers surveyed by Allianz and McKinsey, Ryu said. He related that last year, strikes in Europe cased $1.5 billion in business interruption, $23 billion was lost to theft in the supply chain, and the four most recent natural disasters caused $33 billion in supply chain disruption.  “And yet, these same risk managers consider insurance to be the least useful risk mitigation tool for this category of risk,” Ryu remarked. “There’s a similar story for product recall risk, which looms much larger than property or workers comp risk for any manufacturer or pharmaceutical company.